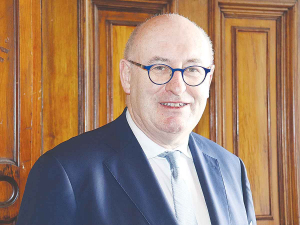 Hogan flew home to Dublin from Brussels and after testing negative for COVID-19, later headed across the country to the town of Clifden in Co Galway. Here he attend a special dinner for a select group of fellow golf-mad politicians and other senior government figures including a high court judge.

The trouble was that Hogan, a very keen and good golfer, didn’t self-isolate for 14 days after the test as required by Irish health authorities. There were also accusations that strict social distancing rules were not adhered to at the function as well and that it never should have taken place anyway.

Hogan and other politicians who attended the golf gathering have been widely condemned for their actions which coincided with Ireland enacting strict new lock down rules. Hogan was also stopped by police near Dublin for using his cell phone while driving.

But Hogan wasn’t the only politician to lose his job as a result of the function. The Irish Minister of Agriculture, Dara Calleary was also sacked by the Irish Prime Minister for attending the dinner. Calleary had only been in the job a matter of a few months. Others who attended the function may also soon find themselves out of a job as the fallout from a golf reunion continues.

Moves to bring all free trade deals in Asia Pacific into one ‘free trade area’ could help countries like New Zealand bounce back from Covid, according to trade expert Stephen Jacobi.