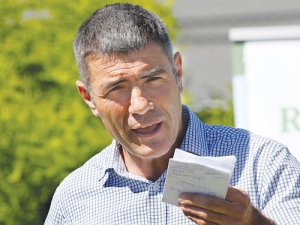 He says New Zealand had huge opportunity in that market in the 1980s, when Iran took one in every four sheep we exported -- about 90,000 tonnes.

But for various reasons, such as bureaucracy and tariff barriers, that market closed to us in the 1990s.

A veterinary agreement has been signed that paves the way for our processors and exporters to “reach out to an importer in the country to get our red meat flowing again,” Guy says.

“Several companies are very excited about getting some product on the water before the end of this season.”

Guy says internationally we are seeing more protectionism. President Donald Trump has done what he said he would do on the campaign trail and not be a part of the Trans Pacific Partnership.

However, the Government believes there is potential to revive it with the other 11 countries.

“Brexit is also a challenge and that has taken the lamb price down by about $10 on average for each carcase because the exchange rate has gone against us. These are two areas we need to watch closely.”

Guy says the new trade strategy will be focused on the free trade agreements, more bi-lateral and multi-lateral agreements and a focus on non-tariff barriers.

“These are what I call ‘itches’, but they are financial itches for our exporters.”

The government also wants to look at its overall trade strategy.

“Have we got the right people with the right skills in the right markets? Where are the new emerging markets where we need to do more?”

Guy was travelling to Europe last week, including Ireland where discussions on the Origin Green concept will be on the agenda.