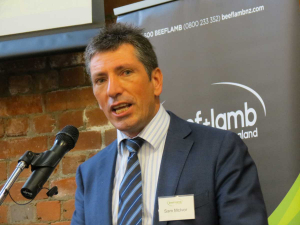 However, the industry organisation says it is disappointed the Government has seemingly ignored the Climate Change Commission’s recommendations for forestry offset limits in the Emissions Trading Scheme (ETS).

B+LNZ chief executive Sam McIvor says the investment in the development and uptake of GHG mitigation technologies is welcome.

“We’re also pleased with the boost for R&D to better understand carbon removals in native forests, the funding for climate-focused extension and advisory services and the support for an emissions pricing system by 2025 that provides incentives for emissions reductions on-farm,” McIvor says.

However, McIvor says B+LNZ is confused as to why the Government is ignoring the Climate Change Commission’s recommendation of the need for limits on forestry offsets within the ETS, saying New Zealand is the only country to allow 100% forestry offsetting.

“The Government’s current proposals such as excluding exotics from the permanent forest category and reforms to the Resource Management Act do not go far enough. Without limits on forestry offsets in the ETS, we will continue to see vast swathes of productive food-producing farmland being converted into exotic pine plantations.

“Forestry will clearly play a role in the reduction of the country’s emissions and we support the establishment of forests as part of integrated landscapes. This is particularly important for our sheep and beef farmers, especially Māori farmers, but the Government must urgently address the unbridled ability of fossil fuel emitters to plant pine trees on productive land.”

McIvor says sheep and beef farmers have reduced GHG emissions by more than 30% since 1990 while improving productivity and generating export value for the country.

“We are the only sector in New Zealand to record this scale of achievement when it comes to reducing emissions. Furthermore, research by the Auckland University of Technology has found the 1.4 million hectares of woody vegetation on New Zealand sheep and beef farms is sucking up between 63 percent and 118 percent of our on-farm agricultural emissions,” he says.

“We are also making good progress with the Government’s He Waka Eke Noa Primary Sector Change Action Partnership to reduce primary sector emissions and enable sustainable food and fibre production for future generations. We remain committed to continuing our 20 years of substantial investment in research and innovation to reduce agricultural emissions.”

He adds that increased support for landowners to support increased forest (native and exotic) planting in the right contexts and places via advisory services is welcome.

“We also appreciate the support for better understanding the sequestration by our indigenous forests, and fairly rewarding landowners for the contribution they are making to climate change and biodiversity.

“It is vital we get a better understanding of the effects that forest management actions have on carbon removals, especially for pre-1990 forests.

“We are also renewing our calls for the Government to report on warming as well as annual emissions, which more accurately reflects our sector’s contribution to climate change, including sequestration.”