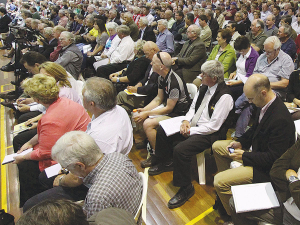 BLNZ is facing a battle as it fights against typical farmer apathy when it comes voting and a growing level of discontent about the industry organisation’s performance.

Farmers around the country will vote soon on whether or not Beef+Lamb NZ will retain its right to continue to levy them and fund its operations.

However, BLNZ is facing a battle as it fights against typical farmer apathy when it comes to such votes, and a growing level of discontent among its levy payer about the industry organisation's performance. David Anderson looks into the issues...

The powerbrokers at Beef+Lamb NZ may very well have a feeling of déjà vu with the organisation facing growing intensitities of farmer disgruntlement as its levy vote fast approaches.

Under the Commodities Levies Act, levy-payers get to vote every six years on whether or not a levy can be collected. It was only 12 years ago when fed-up sheep farmers voted to disestablish the wool levy - which many believe has led to that sector's long, slow decline.

There are major rumblings of discontent from many of the same farmers about the beef and lamb levy and there's a real risk that it could go the same way as wool's. In recent times, new farmer advocacy groups like Groundswell NZ have popped up, with many of its supporters disappointed and frustrated by what they believe has been a 'lack of fight' put up by farmer-led organisations like Beef + Lamb NZ, DairyNZ and Fed Farmers against ever-growing government regulations.</p?

However, despite its frustration about the industry good organisations advocacy or apparent lack of it, even the leaders of Groundswell NZ do not want to see the demise of Beef+Lamb NZ. The organisation’s spokesman Bryce McKenzie says Groundswell NZ’s position is crystal clear.

“We stand firmly in favour of the excellent work both Beef+Lamb NZ and DairyNZ do in the form of extension work, conveying practical applications of new innovations to farmers in the field. If levy votes are lost it could be quite damaging to farming.”

Agriculture Minister Damien O’Connor – another supporter of the BLNZ levy – recently told the Newsroom website that anyone tempted to vote to end the beef and lamb levies just needs look at what has happened to the wool sector.

“That decision, in hindsight, has contributed even further to the demise of that wool sector.

"It has simply gone to the dogs," he warns.

Some 15,000 eligible beef and lamb levy payers hold the fate of Beef+Lamb NZ, which is budgeting to collect $34.2m in levies this year, in their ballot papers. For the sheepmeat and beef levy to continue, each must pass on two counts:

So, Beef+Lamb NZ needs to secure more than 50% on both of these counts. Passing on only one form of vote will mean a no vote for that levy. This means that more than 50% on the one-farmer onevote and less than 50% by weighted vote would equate to a no vote.

History shows that sheep and beef farmers are not enthralled or highly engaged by levy votes.

However, it is fair to say that both in 2009 and 2015 the extent of farmer discontent and anger about Beef+Lamb NZ was nowhere at the levels of where this is today.

BLNZ says where there’s a need for industry- good research, information and advocacy, a levy is the best mechanism to effectively fund these activities.

Tuesday 6 July: Last day to get postal votes in the mail.

The referendum results are expected to be available around ten days after voting closes.

Sheep farmers will be asked to pay an extra 5 cents a head from October 1 under proposed new Beef+Lamb NZ (BLNZ) levies.

However, the beef levy will remain the same.

As well as voting for the industry good body to continue, BLNZ is also asking farmers for approval to an increase in the sheepmeat levy - from 70c to 75c a head, but the beef levy will stay at $5.40/head.

As lambing and calving get underway, Beef + Lamb New Zealand is reminding farmers to consider their carcase disposal options this spring.