Goff holds TPP talks in US 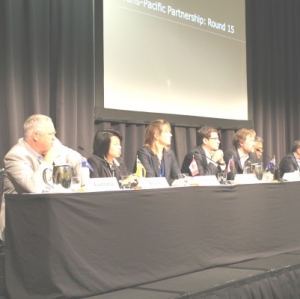 Goff says he has worked with Weisel in the past. "With TPP negotiations at critical point, the visit was an opportunity to be briefed on the state of those negotiations and to press New Zealand's interests and concerns," Goff says.

The visit included meetings at the Department of State, Defence, and the Office of US Trade Representative. He also held discussions at Congress and with New Zealand exporters, US businesses, and independent trade experts.

"New Zealand's bottom lines in a TPP include removing obstacles to New Zealand trade in agriculture and other goods and services in key markets like Japan, Canada, the US, and Mexico," says Goff.

"Attempts to achieve bilateral free trade agreements with these countries have previously failed because New Zealand is a small market which has already removed most tariff and other barriers.
Agricultural interest groups in each of those countries fear the impact of freeing-up entry to NZ's efficient agricultural exporters."

Goff says the general view in Washington is that the TPP will be concluded, but that that is by no means guaranteed. "Changes requiring free market access for agricultural goods represent a huge change for countries like Japan and Canada and necessary concessions may only be made in the last round," he says.

"In the US itself, the passage of a Trade Promotion Authority and voting up of the ultimate TPP treaty will require active intervention by the President in order to be passed by a majority vote, including some in a reluctant Democrat caucus.

"New Zealand has critical defensive issues to be protected in the last stages of the negotiation, but also huge gains in export income and jobs from access to markets including government procurement contracts if it succeeds," Goff says.