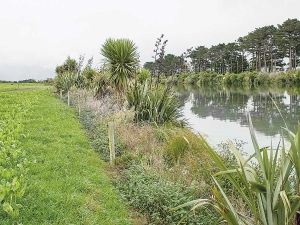 Fonterra opposes proposals to move current fencing of waterways to a 5m setback.

Fonterra wants the Government to remove suggested maximum required levels of nitrogen and phosphorous in streams.

In its submission on the Government’s Action of Healthy Waterways proposal, Fonterra says it “strongly opposes” some of the maximum required levels for dissolved inorganic nitrogen (DIN) and dissolved reactive phosphorus (DRP).

Fonterra believes that in-stream bottom lines should only be used where there is a direct link to the outcomes sought.

“The inclusion of DIN and DRP as attributes does not well represent biological ecosystem health, and the impacts of these attributes on individuals and communities is not well understood.”

The co-op supports a DairyNZ proposal to consider a total nitrogen bottom line that reflects a more conservative protection level for fish and other organisms.

Under the Government’s proposal, regional councils would amend regional plans by 2025 to meet new ecosystem health standards. Modelling suggests reductions in nitrogen losses of 25-80% would be required to meet these in affected catchments.

“We do not support the proposed nitrogen and phosphorus bottom lines as the most effective way to achieve this. DairyNZ’s position is that these new ‘ecosystem health’ nutrient thresholds are not scientifically robust and are unlikely to achieve improvements in waterway health as sought by the community.”

Fonterra is also opposing the suggested 5m fencing set-backs. Instead it wants the focus of regulation to be on fencing waterways not currently fenced. Excluding cattle from waterways has significant benefits in enhancing ecological quality, water clarity and reducing risk to human health.

As adopters of stock exclusion ahead of regulation, Fonterra farmers have spent a lot of money and effort to exclude stock from over 98% of the waterways covered by the proposal, the co-op says.

“Farmers should not be forced to relocate these existing fences unless there is a clear scientific rationale for doing so,” Richard Allen said.

“Common sense tells you that farmers who have voluntarily fenced waterways years before it was mandated should not be punished for having done the right thing.

“Instead, the focus should be on waterways that haven’t been fenced.”

Correction: This article previously stated that Fonterra wanted to remove the minimum required levels of nitrogen and phosphorous in streams, rather than the maximum levels. This has been amended.