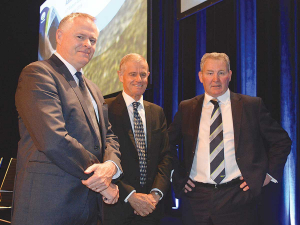 Frustrated Fonterra farmers called for chairman John Monaghan to take responsibility for the co-op’s financial debacle and step down.

At its annual general meeting in Invercargill this month, Monaghan stared down calls to resign from several shareholders.

However, some shareholders backed the Wairarapa farmer to continue as chairman.

Shareholder Pete Moynihan told the meeting that as a Fonterra shareholder he hasn’t been able to walk around with pride.

“We have all become a laughing joke.”

Moynihan urged board members to appoint a new chairman at their next meeting.

“From my personal perspective, the chair must change.”

He told the meeting if there was another processor ready to take Fonterra’s milk the co-op would lose about 30% of its Southland suppliers.

Another shareholder, Jan Marten Kingma, told the meeting the directors are acting as if they weren’t involved in bad decisions.

“We are still living on the same planet: the same staff and board are still there.

Kingma said shareholders are now watching the same board and staff implement the strategic change. He called for accountability for the loss, incompetence and failure by Fonterra leadership.

“We want someone to take responsibility -- take ownership and simply apologise.”

He also warned that Fonterra’s share of milk supply out of Southland is eroding thanks to its disastrous performance and lack of accountability.

He also urged the directors to take his comments into account when appointing the chairman after the AGM.

Monaghan responded by saying that everyone must take responsibility for the co-op’s shortcomings in the past. So rather than cut and run he has decided to stay on to do something about them.

Monaghan says the board is now “totally rejuvenated”, assisted by a new chief executive and chief financial officer.

He later told Rural News that he wasn’t surprised by calls to resign.

Monaghan got support from some farmers.

One shareholder thanked him for “putting on crash helmets” and making some courageous decisions.

He praised Monaghan’s leadership in the redevelopment of the co-op strategy.

“The decision not to pay bonuses and a pay freeze for salaries over $100,000, that would not have been an easy decision to make and I think we need to acknowledge it,” he said.

“The decision demonstrates some ownership of Fonterra’s issues and would also have had an impact on our own staff’s personal cashflows.”