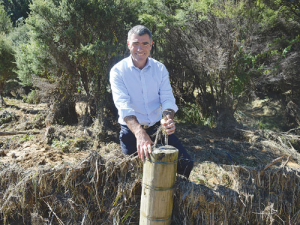 The Government is looking into claims by flood-stricken farmers that floating logs were responsible for causing major damage.

After a meeting with about 60 farmers in Kawakawa Bay [South Auckland] last week, Primary Industries Minister Nathan Guy said the general feeling was that logging was “a general issue”.

“There are some logging issues where slush has come down hill and come down into local streams and drains,” he told Rural News.

“That’s a concern and I have asked my officials to work closely with the forestry company and the council.”

Guy says water reticulation, fences and slips were the main casualties of the floods that affected the Coromandel and Franklin districts.

“The damage here is significant and the recovery phase will be a challenge for some badly affected farms,” says Guy, who visited a storm-damaged farm belonging to Deputy Auckland Mayor Bill Cashmore at Kawakawa Bay.

Extra funding will now be available if required to coordinate support through the Waikato Rural Support Trust who are already on the ground with Federated Farmers assessing needs to help plan recovery activities.

MPI is also working with the Ministry of Social Development to activate Enhanced Taskforce Green, volunteer workers, and in extreme cases there may also be Rural Assistance Payments (RAPs) available to farmers in severe hardship.

Cashmore says the event was not a one in 100 years event as reported in the media.

“The worst flooding we had was in 1966, about a metre higher than this event,” he says.

He says this month’s floods have caused about $200,000 damage on his farm alone. His farm received 370mm of rain within five days, washing away fences, roads and tracks.

“We have about 200 slips on our property…but there are others who have copped more damage than us.”