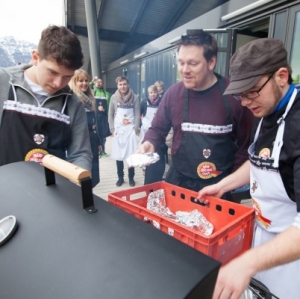 Combine New Zealand lamb with 40 keen foodies, a celebrity chef, barbecue equipment, spectacular alpine scenery... and a forecast for snow. What have you got? Winter Grillcamp – a Beef + Lamb New Zealand promotion in Germany.

"Hosting a barbecue in zero temperatures at the top of Germany's highest mountain may seem extreme, but we wanted to do something out of the ordinary," says Nick Beeby, Beef + Lamb New Zealand market manager, emerging markets.

"The event was run alongside a competition, so we had to have that pull."

It worked. The competition attracted 8000 entries from the readers of glossy magazines GQ and Eat Smarter, keen to learn about the secrets to cooking a perfect barbecue from chef Heiko Schulz.

GQ describes itself as the sophisticated choice for its 430,000 readers, "exploring the male universe with intellectual opinion, attitude and style". Eat Smarter aims to make healthy lifestyles a pleasure, with recipes disproving the prejudice that food that's good for you can't taste good too.

The competition winners were invited to the special mountaintop barbecue, as well as a number of popular food writers. Their experience is already generating positive coverage in the press and across the blogosphere.

The promotion was timed to garner maximum media attention in the crucial run-up to Easter, Beeby says.

"Easter is a key consumption time for lamb so we want to make sure that when people are buying, it's New Zealand lamb they're looking to put in their shopping baskets."