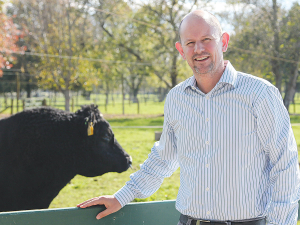 "I wanted to move to the private sector after 18 years in the state sector," he says.

"I wanted to work in the dairy industry as in my view it is the engine room of the New Zealand economy. It was then, it is now, and it will be fore many years to come. While other sectors come and go, the dairy industry leads the way."

"LIC has transformed over the last 10 years into a modern, progressive cooperative."

He lists the ongoing investment LIC makes into R&D and the benefits that brings the sector: over 6% of revenue goes to R&D, the highest percentage of any established company in the New Zealand food and fibre sectors.

"Being a co-operative helps LIC have a long-term focus, investing in science, which may not pay back for a decade or may never even pay back - like our research into genomics, low methane emitting cows, and heat tolerant cows."

McNee notes that LIC provides 75% of dairy and beef genetics in the sector.

"That genetic gain is so important," he says.

McNee believes the purpose of genomics in animal evaluation is to predict the future. He says it enables elite young bulls to be used for artificial breeding, effectively fast-tracking genetic gain to breed a more sustainable animal.

"Increasing genetic gain through breeding the best quality heifer calves has become an even more valued aspect of dairy farmers' seasonal focus, and genomics is one of the critical technologies to help farmers breed more productive and climate-friendly cows."

McNee puts down LIC's success to its people, who he says are passionate about serving the dairy sector.

"It is and will always remain a very important part of the New Zealand dairy industry," he says.

An announcement on the new chief executive for LIC will be made shortly, says chairman Murray King.

He told the recent LIC annual meeting that the board is progressing with its appointment of a successor to McNee and is in the final stages of selection.

"An announcement will be made shortly but the restrictions imposed by the Covid-19 pandemic have delayed the progress," he says.

King thanked McNee for his service.