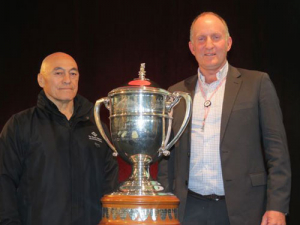 Māori sheep and beef farmers are being urged to enter the Ahuwhenua Trophy, Te Puni Kōkiri Excellence in Māori Farming Award 2019 for Sheep and Beef.

Ahuwhenua Trophy management committee chairman, Kingi Smiler says Māori sheep and beef farmers throughout the country are doing great things on their land and the Ahuwhenua Trophy competition offers them a great opportunity to showcase their efforts to their peers and all others in the primary sector.

Smiler says many Māori farmers are leading way in terms of developing and implementing long term sustainable practices on their land as kaitiaki, as well as embracing new technologies. He says it is important that the wider community understand this and there is no better way of doing this than by entering the Ahuwhenua Trophy competition.

“While there is great prestige attached to winning the competition, all those who enter gain significant benefits. Their farms will be judged by a panel of experts who can give them invaluable feedback which will help them improve and grow their businesses. Past entrants, finalists and winners all spoken highly about the value they have gained from being part of the competition and getting good independent advice,” he says.

Smiler has issued a special plea to farm consultants and other rural professionals to support the competition and to encourage Māori trusts, incorporations and individual whānau to consider entering the competition. He says too often some Māori farmers don’t realise just how good their farms are and a word of encouragement from rural professionals will often be the catalyst for them to enter.

“The Ahuwhenua Trophy is an iconic taonga and throughout its existence it has built up a rich cultural and spiritual history as well as being a symbol of excellence in farming. The past the entrants, finalists and winners of the trophy have all played a huge part in growing the legacy of Sir Apirana Ngata and Lord Bledisloe who inaugurated the competition and acting as role models for others,” he says.

The 2019 competition was officially launched by the Chairman of Beef + Lamb New Zealand, Andrew Morrison at the Red Meat Sector conference in Napier yesterday.

He says “the Red Meat Sector conference is the perfect forum to launch the 2019 Ahuwhenua Trophy competition for sheep and beef. Māori are a major player in our sector and they bring both scale and innovation which contribute hugely to our sheep and beef exports and the strength of the New Zealand economy. The Ahuwhenua Trophy provides not only an opportunity to showcase the achievements and sustainable practices of Māori farmers, but also to put the spotlight on the whole of the sheep and beef sector.