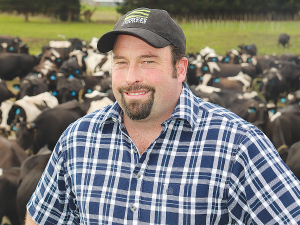 He says it will give him an opportunity to put forward some of his own ideas as he takes over the role previously held by the Waikato’s Chris Lewis.

McIntyre says there’s a lot of discussion around the changes taking place in the dairy industry and there are many farmers who are uncomfortable about some aspects of this. He believes change is a feature of the evolution of the dairy industry, which has been driven by farmers and largely supported by society.

He says change has occurred because of the need to feed the global population, as well as supporting the NZ economy.

“We are now in an era when greater change is being demanded by society. I see my role and the role of the dairy section within Feds to advocate for and to lead this change in a way and at a pace that brings everyone with us,” McIntrye told Rural News.

“I think there is danger at the moment – with some of the policy that is out there and way it is being implemented – it is going to make it hard for some farmers to come on the journey. My goal is about advocating for sensible change.”

One of the big issues McIntyre says the dairy industry has to solve is attracting more people to work on farm. He says some of the narrative around the dairy industry is negative, with claims that it is contributing to climate change and the degradation of waterways. He reckons such comments can even get down the best of dairy farmers.

“I was at the dairy industry awards some months ago and a Government minister came up to me and said,: ‘We don’t say this enough but thank you so much for what you do’. That was really nice but I wish it was said more often,” he says.

McIntyre believe that as well as encouraging more New Zealanders to go farming there is a need for the Government to change the immigration settings. He says such is the competition for staff that when you hire someone, you are effectively stealing them from someone in your industry or someone in another sector.

Richard McIntyre and his wife Emma are sharemilkers on a 200 hectare property on State Highway one, just north of Levin, where they milk 450 cows and rear 600 calves and run beef on a block they lease nearby.

They have been sharemilking for 14 years and are working towards buying their own farm in the future. The couple employ three staff and McIntyre says growing the business to the point when they could employ staff was part of a ‘de-risking’ strategy.

“We wanted to add a bit of diversification so if the milk price was low we had other income streams from the calf rearing and beef side of it.” he told Rural News.

McIntyre is a strong advocate of the sharemilking system and is confident that it will survive – despite the many changes taking place in the dairy industry. He says sharemilking offers an excellent pathway to farm ownership and also benefits farm owners who take on sharemilkers.