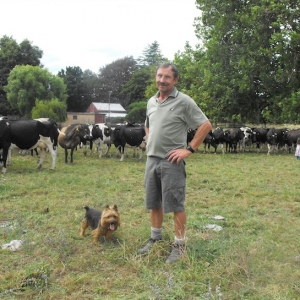 A bovine tuberculosis (TB) infection that has affected several herds from the same Mangakino business has so far been contained.

NAIT and LIC data has allowed OSPRI's TBfree veterinarians to trace any stock that have been moved off the infected properties and these animals will be TB tested to avoid the disease spreading.

Official have informed all immediate neighbours of the infected herds and reassured them that the disease is well contained and there is negligible risk of it spreading 'over the fence'.

Bovine TB spreads through close contact between animals and not by gumboots or tractor and truck tyres.

TBfree Waikato Committee chair John Bubb says having bovine TB in your herd can cause extreme emotional and financial stress for the affected farmer.

"They need support to help them through this difficult time. There are various avenues available to farmers with a TB-infected herd, including their local TBfree committee member who is likely to have experienced the effects of the disease first-hand, Rural Support Trusts and TBfree staff," says Bubb.

"Importantly, the farmer needs the support of their neighbours and local community. There remains an unfortunate stigma attached to herd TB infections. This can be addressed by keeping neighbours informed of the situation and organising events such as shed meetings."

As the number of infected herds has dropped from about 1700 in the mid-1990s to 51 today, the awareness of bovine TB in New Zealand has declined.

"Educating farmers about the risk of TB is vital towards keeping infected herd numbers under control. Nearly 10 million hectares of New Zealand is known to contain TB-infected wild animals, with possums being the main source of the disease in these areas," says Bubb.

Stock movement-related infections are a potential cause of the disease spreading. This can be kept in check by ensuring farmers play their part in controlling the disease.

"You must make wise stock purchasing decisions and ensure all animals are accompanied by a correctly filled out Animal Status Declaration form before they are allowed onto your farm. All animal movements, including farm-to-farm movements, must be recorded in the NAIT system to ensure lifetime traceability," Bubb says.