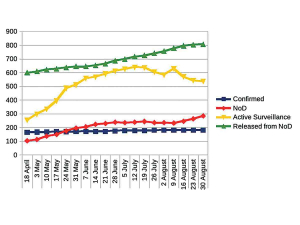 The latest Mycoplasma bovis statistics from MPI show a spring uptick in farms under a notice of direction but confirmed cases have remained at 182 since the start of August. Rural News Group/Data: MPI.

A positive sign for the Mycoplasma bovis eradication programme is that a clear majority of infected farms are now beef rather than dairy.

The latest M. bovis statistics from MPI show a spring uptick in farms under a notice of direction (NOD), but confirmed cases have remained at 182 since the start of August.

“So we’re actually seeing a shift greatly away from dairying and towards the beef sector,” Roche told Rural News.

“And beef properties are highly unlikely to infect another property.”

The statistics also show the number of farms under active surveillance appearing to trend down after peaking through July.

Roche says it’s too early to say the programme is over the hump but all indications are positive.

He expects some increase in confirmed cases as the dairy sector returns to production and bulk milk testing resumes – but far less than last season when bulk milk testing turned up 63 suspect farms. Fourteen of these were already known trace properties and only three or four of the rest were confirmed as infected.

However, Roche says there’s no question that NAIT compliance and on farm biosecurity is improving.

“There will always be people who haven’t changed greatly, but the vast majority are more aware of what puts their business at risk and they’re taking action to prevent [that].”

Roche believes all indications are positive. He says all of the molecular phylogenetic work still pointed to a single incursion in late 2015 or early 2016.

“None of those thresholds have been breached and our numbers look to be improving,” he told Rural News.

Meanwhile, the M. Bovis programme is making changes to its protocols for ELISA testing of blood samples.

Roche says the changes will reduce the amount of time many farms spend under active surveillance and NODs.

“This is a positive step forward in reducing the impact on farmers from sampling and testing for M. bovis. Our scientists have analysed the results from hundreds of thousands of samples,” he told Rural News.

“From that, they have refined our sampling criteria to effectively halve the number of rounds of sampling and testing required for many farms, while ensuring we still correctly identify infected management groups.”

Where possible, blood samples will now be collected from more cattle when a property is tested, and how the ELISA test results are interpreted will change.

The threshold for designating an individual animal as a ‘reactor’ will increase, while the percentage of reactors required for a round to be determined positive will decrease. There will no longer be suspicious rounds, only positive or negative.

The change will mean that most farms under active surveillance will only have to muster animals for one round of sampling with no need for a second round.

Roche says the change has been made because they now understand how good the ELISA test is.

“The vast majority of farms we should be able to release from the programme far more quickly,” said Roche.