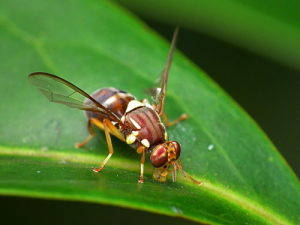 A single male Queensland fruit fly has been found in a surveillance trap in the Auckland suburb of Devonport.

The fly was collected from a fruit fly trap and formally identified on Thursday afternoon.

The Queensland fruit fly has been detected six times before in northern New Zealand – in Whangarei and in Auckland. Of these detections, only one, in Auckland in 2015, turned out to be a part of a wider breeding population and this was successfully eradicated by Biosecurity New Zealand.

Duthie says the team has responded swiftly and field crews are starting work today setting additional fruit fly lure traps to determine if other flies are present in the area.

“It is vital to find out if this insect is a solitary find or if there is a wider population in Auckland that will need to be destroyed.

“If it established here, the Queensland fruit fly could have serious consequences for New Zealand’s horticultural industry. It can damage a wide range of fruit and vegetables and could lead to restrictions on trade in some of our horticultural exports.”

Biosecurity New Zealand is working closely with international trading partners and GIA partners in the horticultural industry to minimise the risk to New Zealand growers and exporters.

As a precautionary measure, restrictions will be soon be put in place on the movement of fruit and vegetables out of the area. Instructions to the public about these controls and the exact area affected will be issued shortly.

A brochure with information about the fruit fly and controls will go to homes in the area later today.

“We will be working closely with the local community as we have found from past experience that public support is vital to success.

“In the meantime we ask people who live in Devonport not to move any fruit or vegetables from their homes,” Duthie says.

“You may notice increased activity in the neighbourhood as we go about inspections and trapping. Our inspectors will seek permission to investigate fruit trees on your property if required.”

“This latest find demonstrates the benefit and effectiveness of MPI’s lure-based surveillance trapping network and the biosecurity system.  The network involves some 7500 traps set nationwide and checked regularly,” Duthie says.

“By setting traps for these pest insects, we are able to find them early, have assurance about exactly where the problem is located and respond faster and more effectively where finds are made.”