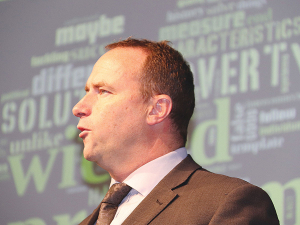 A wicked problem: that’s how the chief science advisor to the Ministry for Primary Industries describes the issue of greenhouse gas (GHG) emissions as they affect agriculture.

He told 200 scientists, farmers, policy makers and rural professionals that while there are levers you can pull to solve the problem, doing so often has unintended, unwanted consequences elsewhere in the system.

“There is not an easy solution. These are political, scientific, social, and ethical problems. All of these combine to be a complex problem without one simple solution,” he said.

Roche says a mish-mash of information is available on climate change, some from people not qualified to speak on the subject. This confusion makes it hard for farmers to get to grips with the issue. And social media have advantages and disadvantages in the climate change debate.

NZ has a unique GHG footprint because our economy is primarily farming based, with about 50% of our GHG emissions coming from agriculture, Roche says.

“In most developed countries agriculture would generate closer to 10% of their emissions. Their major GHGs tend to be from industry or transport, for which there are solutions, e.g. alternative sources of power or electric vehicles, etc,” he said.

“These are not simple solutions but they are solutions. Whereas with our agricultural emissions, especially methane from enteric rumen fermentation, we are dealing with 60 million years of evolution.”

This is a difficult problem because of the near impossible task of trying to fight nature. NZ scientists are trying to find solutions and are making progress on various fronts such as developing better genetics, breeding forages that reduce methane emissions, and vaccines and feed supplements that can make a difference.

Roche says despite all the good work NZ is doing it still tends to give itself a bad rap.

“I call it self-flagellation, whipping ourselves. We hold ourselves to the highest possible standard because we live in a lovely peaceful country free from political and social turmoil,” Roche says.

“But we often don’t celebrate our successes and tend to be very critical of ourselves. Often we don’t put that criticism in the context of the wider world and [don’t] celebrate the things we do very well, such as producing milk and meat with relatively low carbon footprints.

“We are not as bad as we think we are and we need to celebrate that and continue to do good work to improve further,” he says.

Roche says in NZ and other countries some people vilify meat and dairy products.

Various interest groups would like us to believe that these products are bad for us and that their production harms the environment.

“NZ can’t ignore the fact that all food production has effects on the environment and as a country we are working hard to correct any negative effects. In government we are working to ensure that our regulations are suitable to allow our economy to grow while making sure our rivers and atmosphere are as clean as they can be,” he said.

“The criticism of the effect of meat and dairy on human health also tends to be simplified, with comparisons of other diets often based very much on calories. But people need to look at the wholesome, high quality food we produce and eat a balanced diet.”

As for dealing with agricultural GHG emissions, Roche insists there are no silver bullets coming soon. But several technologies are being worked on and if they come to fruition they could be change agents.

He says NZ research into mitigating the ruminant animal problem is world class and capable of yielding a striking breakthrough.