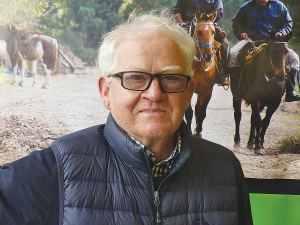 Ross Macmillan is looking forward to treating a coach load of international visitors to a nearly two-week tour of the South Island’s Merino industry.

Macmillan is the managing director of Rangiora-based Farm to Farm Tours.

The tour is timed to coincide with the one-day Merino Excellence 2020 Congress in Cromwell, on March 12.

Macmillan, a farm consultant, who 30 years ago founded a tour business specialising in arranging and conducting agribusiness-themed tours in New Zealand and around the world.

“We’ve got about a coach load of international people coming from Russia and Uruguay and Kazakhstan and Australia,” he said.

“Probably would’ve had more Aussies if it wasn’t for the drought and the fires.”

He says the tour will start from Christchurch and go up to Cheviot then on to Marlborough and up the Awatere Valley “to see how all the fine wool blokes are getting on up there.”

It will then head down the West Coast into the Merino heartland of Central Otago. The centrepiece of the tour is six days in and around Central and the Mackenzie Country, taking in the Congress, the Wanaka A&P Show, and visits to a number of Merino stations.

Macmillan also said the Merino industry was “on a bit of a roll.”

“Fine wool’s doing really well at the moment so these people are keen to show off their genetics and the properties that they run on.”

The congress is on March 12 in Cromwell.  Organiser, NZ Stud Merino Breeders president Ron Small, of Marlborough’s Blairich Station, explained that the World Federation of Merino Breeders has a major conference every four years, the last being in 2018 in Uruguay.

New Zealand pitched for the 2022 world event, but lost out to Hungary – mainly because it had not been in the northern hemisphere for some time – but New Zealand was then invited to hold the smaller interim congress this year.

Small is expecting more than 100 for the congress with about 40 coming from overseas.

Speakers include Cathrine Stange of the Devold of Norway Group, a vertically-integrated wool clothing specialist founded in 1853 which boasts of “sheep to shop” traceability and counts several New Zealand merino farmers among its suppliers.

Small said the theme of the congress was in its title - Merino Excellence.

It would cover animal health, nutrition, management, breeding and the use of Australian Sheep Breeding Values (ABSV), particularly for footrot, and what was required to produce quality wool.

Fine wool prices had backed off a little from the highs of last year, but still doing exceedingly well, said Small.

“Most of the Merino wool in New Zealand now is forward-contracted so it’s protected against the highs and drops in the market, so it’s very good.”