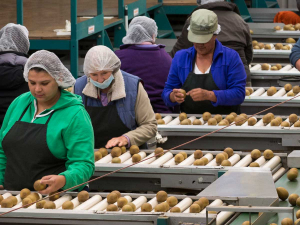 33.5m tray equivalents of kiwifruit were packed by Seeka in 2019.

The large integrated horticultural and produce company grows, processes and distributes and markets a range of products – including kiwifruit and avocados.

Chief executive Michael Franks says revenue for the past year was $236m – up 16% on the previous year.

He says Seeka’s financial performance was impacted by the early 2019 long, dry summer – which lowered Hayward kiwifruit yields in both Australia and New Zealand. Hayward volumes were well down on forecast and the previous year’s yields – negatively impacting Seeka’s financial results.

However, Franks says offsetting this was an expansion of its core business with the purchase of Aongatete Coolstores in the Bay of Plenty, which delivered cost efficiencies. He added that the company made good gains on the sale of its Northland orchard assets.

“Operationally, the performance and returns to supplying growers were excellent.”

He says 2019 was a successful year for harvest and handling operations across New Zealand and Australia – including kiwifruit, avocado, kiwiberry, nashi and pears. Franks says, in New Zealand, 33.5m tray equivalents of kiwifruit were packed by Seeka

He says Seeka is focused on consolidating operations following the acquisition of the Northland and Aongatete assets, including selling orchard assets to repay debt, while securing supply to Seeka’s core kiwifruit business.

“We are also investigating the sell down and lease back of the Australian kiwifruit orchards, which would release funds for debt reduction and potential expansion, as we continue to look for investment opportunities by acquisition to deliver growth and shareholder value.”

Seeka says it is anticipating improved earnings in 2020 conditional on NZ and Australian crop volumes. The company says it has an increasing volume of Zespri SunGold, with both new growers and new developments, along with a significantly improved SeekaFresh business.