A honey jar from disaster 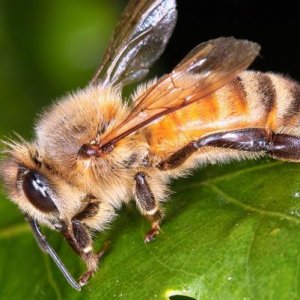 Just one honey jar entering this country from Australia could spell disaster for our bees, warns Federated Farmers.

The bee industry in 10 years has gone from having some of the healthiest honey bees in the world, to being under co

"While the bee industry has been let down by failures in biosecurity, the Varroa Mite being exhibit A, frankly Kiwis and visitors to New Zealand need to know just how much damage a single infected jar or infected pollen could have," he says.

"Instead of just leaving it all up to biosecurity staff at the airport, everyone has to realise they are as much a part of the bee border patrol as beekeepers."

Hartnell says in the past 10 years three of the world's most serious bee diseases have been confirmed in New Zealand.

"It only takes European foulbrood and the Israeli acute paralysis virus before we risk the devastating effects of colony collapse disorder," he says.

"European foulbrood is endemic in Australia while their bees carry the Israeli acute paralysis virus.

"Since both are transmittable in honey, Kiwis and visitors to New Zealand need to put that 'souvenir' back on the shelf. It takes just one jar ending up in the recycling for bees to follow a honey pot to disaster.

"The only solution to European foulbrood disease is antibiotics and its residue in bee products means a serious downgrading of quality. Who wants that outcome?

"The 'Bee Team' wants greater education for Kiwis and our visitors matched with biosecurity vigilance and serious enforcement. It is time to get hard and enforce penalties.

"It also means vigilance on the trade front. Who wants to jeopardise our food based export economy by allowing potentially diseased honey or bee products into New Zealand?

"Meanwhile our ports need to be on-guard for the Asian honey bee, now endemic in Queensland. If it came here it would rate up there with wasps as a catastrophe.

"It not only competes for floral resources but is highly aggressive and breeds rapidly. Asian bees will 'smash and grab' from honey bee hives and have the potential to threaten our native birds and insects.

"Each and every day, kilograms of illegal honey are seized at the border from passengers arriving in New Zealand. With each a potential bio-bomb the Bee Team needs the New Zealand public on our side," Hartnell says.

- Bacteria and viruses can be transported in honey, imported pollen and other bee products

-  New Zealand does not have either the European Foulbrood disease or the Israeli Acute Paralysis Virus, Australia does

-  New Zealand does not have the pest Asian Honey Bee, Australia does

-  Australia does not have has Varroa, New Zealand does

- Australia does not want Varroa, this is fact and we must help them to maintain their status

- While Varroa cannot be transported in honey, European foulbrood and Israeli Paralysis Virus are fully transmissible in honey.

Remember, if it does not seem right, or you see something strange and suspect an exotic pest or disease, report it immediately to 0800 80 99 66.

Colin Hurst is the new chairperson of the Federated Farmers Arable Industry Group.