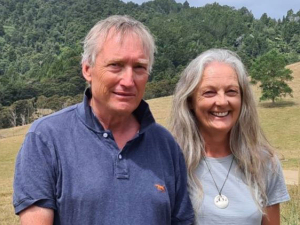 Run by the New Zealand Farm Environment Trust, the awards champion sustainable farming and growing, with the Auckland awards announced earlier this week on 21 June.

The Mannerings own Waytemore Farms in Paparimu, a sheep, beef and dairy farm, consisting of three family farm holdings managed as one entity by the Mannerings.

The Mannerings run a breeding flock of 2,100 Romney ewes, along with 720 beef cattle, and 860 dairy cows with 360 replacements. It’s a mostly closed model where the dairy and beef operations support each other.

The property features a substantial amount of native forest and significant effort goes into conservation work, including sustained predator control and fencing off well-established indigenous forests, waterways and wetlands.

To ensure their focus on sustainable farming is continued, the Mannerings have employed a farm manager trained in ecology and a dedicated farm ranger trained in conservation biology.

The judges praised the team’s farming practices which have resulted in excellent production and stock health alongside regeneration of the special native bush blocks.

“The Mannerings have shown a lifelong passion for combining a profitable, mixed-farm unit while protecting and enhancing the considerable natural assets found on-farm,” said the judges. “The business structure has been set up to support this environmental focus.”

A public field day will be held at Waytemore Farms in October 2022.

Organisers of the Ballance Farm Environment Awards (BFEA) say this year's programme will proceed despite interruptions caused by Covid.

Entries have opened for the 2021 Ballance Farm Environment Awards, including a new award.