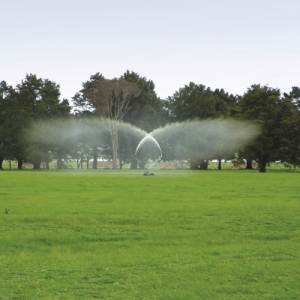 "This will help unlock the potential that water storage and irrigation can deliver, giving a real boost to jobs and exports in regional economies," he says.

"This new capital funding of $40 million comes from the Future Investment Fund and will be used to purchase shares in Crown Irrigation, enabling it to make further investments. It is in addition to $80 million allocated in last year's Budget.

"If current proposals are advanced there could be a further 420,000ha of irrigated land available for a variety of uses over time. Research from NZIER suggests that exports could be boosted by around $4 billion a year by 2026.

"Only 2% of rainfall in New Zealand is captured and used for irrigation. Clearly we need to do a better job of using this precious resource.

"After the extreme drought most of the country suffered last year, and the one earlier this year in Northland and Waikato, the need for better water storage is obvious," Guy says.

Crown Irrigation makes targeted bridging investments in irrigation schemes that would not be established with private finance alone. All decisions are made by an independent board.

A few crumbs for rural in the budget

There are a number of small pockets of money allocated to specific rural initiatives in the budget announced by Finance Minister Grant Robertson on Thursday.