The importance of managing ewes in late pregnancy and early lactation 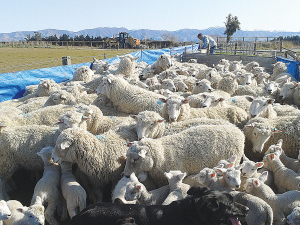 Ewes are under the greatest nutritional and metabolic stress in late pregnancy and in early lactation.

The ewe is under her greatest nutritional and metabolic stress in late pregnancy and in early lactation.

Therefore this is the period where her nutrition can have the greatest impact on lamb survival and growth to weaning. It can also affect the ewe’s condition at weaning, which can have flow-on effects into next year’s performance.

It is important to remember that ewes are generally bred over a two-to-three-cycle period. So, when the first ewe to lamb is three weeks away from lambing, the last ewe to lamb can be seven to ten weeks away. Thus, the nutritional needs of the two ewes differ greatly.

This indicates the power of using either ram harnesses during breeding, or at pregnancy scanning identifying early and late lambing ewes, from an overall flock optimal nutritional management perspective. In late pregnancy and in early lactation, the ability of the ewe to buffer against sub-optimal nutrition is dependent on her body condition. The ideal ewe’s body condition score is 3.0 to 3.5.

Total weight of lamb weaned per ewe drives profitability of most New Zealand sheep farms. Once a lamb is born, its survival and weaning weight is driven by the amount of milk the ewe produces.

So, sheep farmers in New Zealand should consider themselves as dairy farmers, as the money they make from selling lambs, either prime or store, comes from milk. Like any good dairy farmer, they should know the importance of ewe condition and nutrition. They need to make management decisions based on this in late pregnancy and lactation.

Four to three weeks out from lambing, ewes should be offered 1.7 to 2.4kg DM/ewe/day. Ideally, post grazing covers would not go below 900kg DM/ha (2cm to 3cm sward heights). In the last two weeks of pregnancy, intake should not be restricted, with allowances offered above 3kg DM/d and pasture covers not going below 1200kg DM/ha (or 4cm).

On many of our farms in late winter/early spring, there is never enough feed to meet the needs of all ewes, so farmers must prioritise based on need. It’s the first cycle, multiple-bearing ewes – especially those in poor body condition – that must be offered the most, followed by better condition first cycle multiples.

When feed is short, singleton bearing ewes and second/third cycle ewes can be offered lower levels of feed in the late pregnancy period. Remember, by the time later-lambing ewes lamb, the feed will likely be lifting below them.

If farmers can offer twins their nutritional needs, then there is no need to separate triplets from them. While they have a greater nutritional requirement, triplet-bearing ewes can’t physically consume any more than a well-fed twin.

Due to the nutritional stress ewes are under in late pregnancy, it is important to limit their time off feed when undertaking activities such as vaccine. This limits the risk of ewes getting sleepy sickness.

Farmers need to use the information they have in front of them when deciding which ewes should be set stocked in which paddocks. Farmers should use information such as each paddock’s pasture cover, the paddock’s lamb survival history and the paddock’s ability to grow feed.

Multiple bearing ewes, again, especially those in poor condition, should be prioritised into paddocks with the highest covers – which have a history of good lamb survival and pasture growth.

Singletons can be put in those paddocks with lower covers, which is likely those that were used later in the winter rotation.

This is why thinking about paddock grazing order is important when designing a winter rotation. Stocking rate at set stocking should ideally be set at a level to ensure pasture covers in individual paddocks stay within the optimal pasture mass of 1200 to 1800kgDM/ha.

Massey University is examining the economic impact and the production consequences of crossbreeding with Wiltshire sheep to a fully shedding flock.

A meat industry-dominated group has formed to carry out the recommendations of the Wool Industry Project Action Group report and is ready to lead that change.