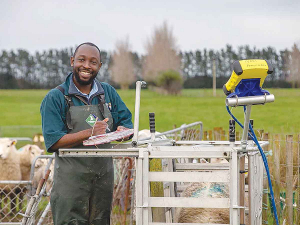 A Massey PhD student known as the ‘worm detective’ for his work on sheep worms will represent New Zealand on a huge global stage in Germany in November.

Seer Ikurior was one of 45 competing NZers and Pasifika, of whom 20 were chosen to pitch their ideas at an annual event called Falling Walls Lab New Zealand. This was held recently by Royal Society Te Aparangi recently, supported by the German Embassy in Wellington.

Falling Walls Lab is described by the Royal Society Te Aparangi as “an opportunity for next generation innovators and creative thinkers to share – in three minutes – their research project, business model or social initiative relevant to the world today and compete to win a trip to the FWL finale in Berlin”.

Ikurior will be among 100 finalists making their pitch at the global Falling Walls Lab final in Berlin in November.

His research is aimed at helping farmers to more sustainably control gastrointestinal nematodes in grazing ruminants. These cost the NZ sheep industry about $300 million a year.

Ikurior calls himself the ‘worm detective because he so admired fictional detectives as a child.

“The current way to detect worms is to count the eggs of worms in lamb faeces, which can be a tedious process for a large flock,” he said.

“My research uses GPS monitors and activity sensors to monitor the movements and activity patterns of infected and uninfected lambs, to see if there are monitorable differences in distance travelled and behaviours.”

So far, his results show that infected lambs idle more and move less than uninfected. He is now working on a behaviour index of activity trends and movement patterns that identify lambs with worms versus those who do not.

“I hope that by integrating this information into existing electronic identification ear tags, the farmer will be able to target treatment to only infected lambs. Targeted treatments means worms are exposed less to anthelmintic drugs and form less [drench] resistance.”

The Falling Walls Lab event is inspired by the fall of the Berlin Wall on November 9, 1989.

The question is asked at every Falling Walls gathering: which walls will fall next?