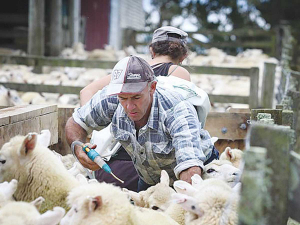 New research has cast even more doubt on the economic value of drenching ewes with long-acting products.

The study led by AgResearch’s Dave Leathwick and co-funded by B+LNZ and AgResearch, showed that initial benefits of drenching with these products, especially to low body condition score ewes, were short-lived. It also showed the effectiveness declined in the interval after the treatments had expired. Untreated ewes tended to catch-up to their treated equivalents.

“This has also been seen in other New Zealand studies and highlights the danger of only assessing benefits at the end of the drug’s pay-out period,” Leathwick says.

He explains that many sheep farmers treat their ewes pre-lambing with long-acting drench products (capsules or injections).

“This is in the expectation that both their ewes and lambs will benefit, however, this study shows that any benefits seen at weaning are likely to over-estimate the true value.”

This latest published research builds on previous studies from NZ and overseas, which have shown that animals treated with long-acting drenches have reduced immunity to worms because they are not being exposed to worm antigens every day.

“The sheep’s immune system needs to ‘see’ worms every day in order to function at its best,” Leathwick says.

This means that when the drug delivery ends, the ewes tend be to be less resilient to worms than those that weren’t treated.

“The true benefit is likely to be less than expected,” he adds.

These results follow on from previous studies, which highlighted that for many farmers, pre-lamb drenching may result in a net financial loss rather than gain.

This occurs because the biggest driver of financial return is lamb survival and not extra weight added to ewes or lambs at weaning.

Lamb survival is highly variable between farms and seasons, as well as treated and untreated ewes.  “This means farmers would benefit more from focusing their efforts on lamb survival to weaning than worrying about parasites,” Leathwick concludes.

Further trial work and modelling carried out in NZ showed that treating ewes pre-lambing with long-acting products increases the risk of developing drench resistance on the farm.

“For most sheep farms today, it is almost too late because resistance is now extremely common.

“For them it is now a case of farming with resistant worms. One certainty is that drench resistance will not go away if you keep drenching all the time.”

Beef + Lamb New Zealand (B+LNZ) says it is concerned the Government’s support for the Global Methane Pledge, announced at COP26 this week, does not adequately articulate its focus on methane originating from waste and fossil fuel sources.