Comparing apples with oranges in insemination 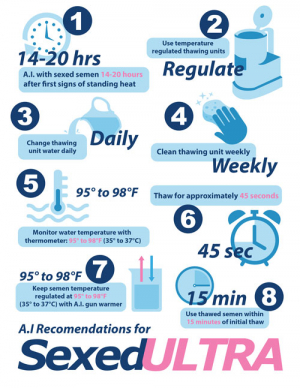 It is true that the current frozen sexed semen product SexedULTRA 4M is the result of almost three decades of research and development.

The results have progressively improved and today almost 50% of the heifer population in the US -- the genetically superior animals in the herd -- are inseminated with SexedULTRA sex sorted semen.

In a recent trial (Rural News January 15), LIC saw an average drop of 13.3% in NRR between conventional and sex-sorted SexedULTRA 4M semen.

Why the difference in New Zealand? For a start, the trial was blind, so the technicians did not know whether the semen they were using was sex-sorted or conventional semen. Here lies the major flaw in this trial.  A blind trial is scientifically the correct way to do an evaluation when you are comparing apples with apples.  Sex-sorted semen for all intents and purposes is completely ‘different’ from conventional semen.

Here are a couple of reasons why the LIC trial has shown results different from those obtained in the US or Europe.  All LIC conventional semen is thawed at farm temperature (water from the tap in a farm) whereas sex-sorted semen has to be thawed at 37 degrees C. In a blind trial this is not possible.  The recommendation for thawing sex-sorted semen has been tried and tested extensively and a warm thaw is consistently better than a cold thaw.  This is flaw number 1 in this comparison.

In a blind trial the timing of insemination cannot be modified for the appropriate type of semen. Perhaps more than half the inseminations would have been done much too early and this has adversely affected the outcome of this trial. There are clear recommendations on how to use this semen in the STgenetics catalogue and website and attached is the flyer from those recommendations.

So, in effect, comparing apples with oranges and expecting it all to be the same is the problem with the LIC frozen semen trial.

On the other hand, LIC has had very good results with fresh sex sorted SexedULTRA semen and consistently obtains comparable results to conventional semen.  Fresh semen has different properties than frozen semen and sex-sorted fresh semen is perhaps more similar to conventional semen.  Fresh sex-sorted semen does not have the same stresses imposed on it, such as lower dose rates and the freezing process.

Used correctly as per the recommendations from Sexing Technologies, both fresh sexed semen and frozen sexed semen should give good results in a well-organised AI programme.

LIC EXPECTS to get more cows in-calf at Christmas in response to high demand for its short gestation genetics offering, and as farmers find new ways to maximise the benefits this season.