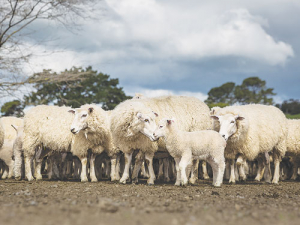 A study has found that many ewes develop lumps on their udders post weaning.

An ongoing study of udder defects in ewes has raised timely new information for farmers, says a Massey University professor.

Anne Ridler, working in sheep & beef cattle health & production, says the study shows that palpating udders about four-six weeks after weaning may be better timing than at weaning. And even if a farmer has palpated at weaning a further check at four-six weeks is warranted.

“We are interested in udder defects in ewes and their effects on production. No research has been done on this for a very long time and our sheep are quite different from 30-40 years ago,” Ridler told Rural News.

“For the last few years we have been following 1200 ewes at Massey’s Riverside farm in Wairarapa and another 200 in Canterbury in association with Lincoln University.  We have been palpating the udders four times a year.

“We are matching the lambs to the ewes and looking at lamb survival, causes of death and growth rates. Any ewes with udder lesions are kept -- unless they are really bad -- so we can look at their effects.”

Eleven farms in the lower North Island have also been involved, with researchers visiting at weaning and pre-mating to palpate udders to see if what they are finding in the research flocks is also happening on commercial farms.

“We still haven’t got all the analysis from the big studies but we have finished the work at the commercial farms,” she says.

One of their main findings was that a lot of ewes developed lumps after weaning.

“Many farmers check udders at weaning time but actually they’d be better to wait four to six weeks after weaning.

“On the commercial farms about 2.5% of the ewes had udder defects at weaning but anther 2.5% developed defects four-six weeks after weaning.

“It is timely given it is coming up to weaning because a lot of farmers will be palpating udders at weaning. If they want to check at weaning that’s fine but it is well worth also checking four-six weeks later.

“We haven’t done the full analysis from the big study but we have found that for ewes whose udders are hard on one or both sides, or with lumps in the udder, their lambs are three-five times more likely to die than if the mothers have normal udders.

“If the lambs survive, their growth rates are 5-35g per day less.

“Unfortunately we don’t have enough data yet to say whether the size of the lumps or the location of lumps (in the udder) have any impact. If farmers have ewes with a couple of little lumps and are wondering whether to cull, we can’t answer that at the moment.

“But if they have hardness on one side or both, it is not a great outcome generally.”

Some ewes have lumps in the midline just in front of the udder or at the back of the udder, Ridler says, and at weaning time they have found about 4% of ewes have these. A lot of farmers think they are bad but they seem to be completely irrelevant.

The research is being funded by Beef + Lamb New Zealand.