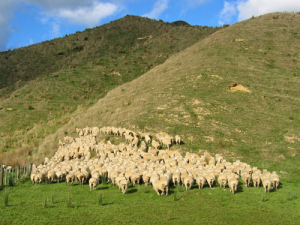 Australian studies indicated that the survival of PI sheep is poor.

Traditionally, bovine viral diarrhoea (BVD) has been considered a disease of cattle. But lately it has been found to cause infections in sheep, deer, alpacas, llamas and pigs.

Sheep in Australia have been found susceptible to infections with BVD, and transient infections in pregnant ewes have been found to cause severe lambing losses: lambing rates as low as 32% were seen in infected flocks. Lambs were born weak with physical abnormalities or were persistently infected (PI) with BVD. Their survival, whether infected transiently or persistently, was poor.

A study of antibodies to BVD in South Australia sheep flocks indicated that in the flocks tested BVD was not common. How well this translates to New Zealand is unknown.

NZ must be cautious about the role sheep play in the spread and persistence of BVD, especially in regions where sheep and cattle are co-grazed or housed close together.

NZ in 2017 farmed 27.37 million sheep and 10.08m cattle (dairy and beef). And because beef and sheep farming was the most extensive agricultural activity in 2016 the risk is high that BVD will persist in cattle herds -- and in sheep flocks.

Although the Australian studies indicated that the survival of PI sheep is poor, NZ sheep flocks could nevertheless pose a risk of BVD spread and persistence here.

The presence of any PI animal onfarm, no matter for how short a time, poses a risk to the health and productivity of all other animals on that property.

So where lambing rates are abnormally low, or many lambs are born with developmental abnormalities, then BVD should be considered a possible cause.

From February 1, the BVD Free New Zealand project has begun challenging farmers and veterinarians to quantify the benefit BVD control could have on their herds.

The ‘BVD Free Challenge 2019’ includes helping farmers to build in and budget for BVD management for their herd, and so to contribute to a business case for eradicating BVD from NZ.

Dairy and beef farmers are being asked to help develop frameworks to control the disease bovine viral diarrhoea (BVD).

CRV Ambreed has appointed a new laboratory to enable New Zealand dairy farmers to gain access to further information about BVD and Johne’s Disease from their herd testing.