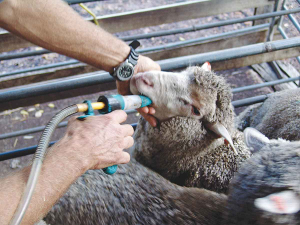 Farmers need to be aware of the growing issue of triple drench resistance.

Triple drench resistance is appearing at an alarming rate, particularly in the North Island. But it can be prevented by correct management.

Marshall, who is the national spokesman for Wormwise (internal parasite management strategy funded by Beef + Lamb NZ), defines triple drench resistance as existing when a previous susceptible population of parasites can no longer be killed with the same chemical, ie the parasites have developed the ability to withstand that chemical.

Triple combination drenches, which include all three drench families, were released in 2004 and initially proved very effective.

While there are plenty of farms where one or more drenches are still effective, vets and farmers are now seeing parasites which can withstand all three chemicals and, in some cases, this is forcing farmers to completely change their farm systems.

Marshall says while using triple active drenches is a great idea, if the use of these is not coupled with farm management practices which help control internal parasites, it puts the business at risk of significant productivity and profitability losses.

One of the first steps farmers should take in understanding and managing the internal parasite status of their farm is to discover the efficacy of their drenches with a faecal egg count reduction test (FECRT).

Marshall recommends doing one of these tests every two to three years in early summer when most internal parasites are present. If a problem is found, this test may need to be done more frequently.

“Some farmers are doing it annually which is a big outlay, but it is recommended otherwise they could be using drenches which are ineffective,” he said.

He admits FECRTs are a blunt tool, but they show farmers that any changes they have made in their drench use and management have had an effect.

FECRTs can be used to determine worm burdens in individual stock classes such as two-tooths before mating or hoggets over winter.

Even mixed age ewes can be tested at times of stress such as pre-lamb.

A simple drench check – where a FEC is done seven to 14 days after drenching – can also give farmers a clue to the efficacy of their drenches. For farmers finishing lambs, doing this test at the start of the season (spring, early summer) will give them an idea of what drench family they should be using that year.

A larval culture will give farmers an insight into what species of internal parasite they are dealing with on their farm.

“Regular monitoring will help farmers understand the efficacy of their drench programme.”

Marshall says all these tests should be done with a vet or animal health provider who is able to interpret the results and advise on any changes in management practices.
Every time farmers use drench they risk developing resistant worm populations. But taking a whole system approach to the management and control of internal parasites will ideally reduce input costs and allow farmers to use drenches in a more useful and targeted way.

“Taking a whole system approach doesn’t happen overnight and it requires constant monitoring and measuring and potentially making changes along the way.”

In light of the emergence of triple-drench resistance, Marshall recommends all livestock farmers attend a Wormwise workshop or work alongside their vets or animal health professionals to develop a plan to manage internal parasites and retain the efficacy of their drench programme.