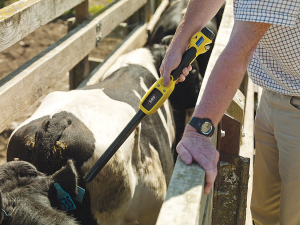 90% of livestock farmers met their NAIT obligations in 2021.

MPI says its push on NAIT compliance is paying off with almost 90% of livestock farmers meeting their obligations in 2021.

However, it is warning against any complacency, despite rates of compliance with the National Animal Identification and Tracing (NAIT) scheme continuing to rise.

The scheme maintains a national database of cattle and deer movements.

"We take non-compliance seriously because of the potentially devastating effect these threats can have on industry and communities," he adds.

"Up to 2018, only about 60% of tagged animals were being registered before first movement. Since 2019, MPI and OSPRI, which maintains the NAIT database, have renewed efforts to improve compliance, and the compliance rate is up to 90% this year."

MPI prosecuted 18 people in charge of animals for failing to meet their obligations under the National Animal Identification and Tracing (NAIT) scheme in 2021.

"It's having the desired effect, but we can't afford complacency," Harrison adds.

"Our message to people with animals, which come under the NAIT scheme, is that we all need to do our part to protect New Zealand. For our part, we will continue to keep a close eye on NAIT compliance."

Harrison believes amendments to penalties in the NAIT Act, which increased the maximum penalty tenfold to $100,000 in late 2019, sends a strong message - that people need to treat this scheme very seriously.

"If you are unsure about what you need to do, please reach out," he adds.

"There is plenty of information, advice and support available. Visit the OSPRI website for details."