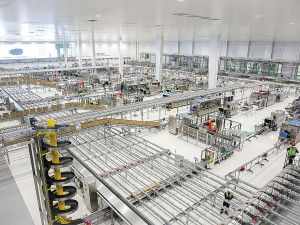 It claims the benchmarking production bases for liquid milk, infant formula and cheese at the park represent the world's largest scale of their kind, employing high levels of automation and digitisation.

The park is also home to six national platforms, including the National Center of Technology Innovation for Dairy and the National Metrology and Testing Center for Dairy Products.

Yili says the development of this industrial cluster is expected to boost regional economic growth and accelerate the growth of global health industries.

The liquid milk production base covers an area of about 950omu (equivalent to the field of play area of 89 FIFA World Cup stadiums) and employs world-leading digital equipment that can ensure unmanned, transparent,efficient and traceable production processes. It can process 6,500 tons of fresh milk per day, which can meet a megacity's daily demand.

The milk powder production base has an annual production capacity of 60,000 tons, which can feed 1.28 million infants per year. Yili say, as the world's largest infant formula production base, the park leads the industry in introducing the Intelligent Building Management System (IBMS), the Facility Management and Control System (FCMS) and applies a variety of cutting-edge interactive technologies.

Chilechuan Ecological Intelligent Pasture, a supporting farm for the park, occupies an area of 11,250mu and has received a total investment of $169m.

"This enables them to learn more about state-of-the-art dairy production models and the entire life-cycle of milk production.

"[The park] is expected to create direct and indirect employment opportunities for more than 350,000 people and attract a total of one million people to live in the region."

Chinese company Yili, which has a sizeable presence in New Zealand, has been chosen as the world's most valuable dairy brand.

Westland Milk Products is about to start a pretty special gold rush aimed at increasing the Chinese-owned dairy company's profitability.

A post-Covid boom for manufacturers?

With many industries hit hard by the Covid pandemic, it seems the popular consensus is that agriculture will be the saving grace for many countries’ economies.