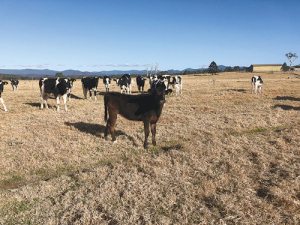 A brown landscape on Vanessa Todd’s farm, Yattarna, near Bodella on the NSW South Coast.

Farmers in New South Wales are digging in to survive as the drought worsens.

With the vast majority of the state’s farming land in drought conditions, and feed and water prices hitting record levels, some farmers are considering their future in the industry, and a few are now quitting.

NSW Department of Primary Industries’ (DPI) combined drought indicator shows 15.3% of the state is in intense drought, 36.4% is experiencing drought and 48.1% is drought affected.

Only 0.1% of the state is described as non-drought and 0.1% as recovering.

The chair of NSW Farmers dairy committee and owner of Little Big Dairy Co in Dubbo, Erika Chesworth, said the big dry from Queensland is heading south. “The dry area is expanding and there’s big pressure on the dairy industry,” she said.

Despite the difficulties and gloomy outlook, Chesworth urges farmers to maintain their social ties, seek financial counselling and “spend to prevent disaster”.

“It comes back to basic stuff: do the little things properly, don’t carry unproductive animals, look at your reproduction, teat spray, vaccinate.

“I encourage farmers to consider employing a consultant, look at your budget, know your costs and be sociable; that really helps. Have people around and take weekends away; try to keep a balance.

“Some cope with these pressures better than others. It can depend on what cycle your business is in but generally farmers are negative at the moment.”

While her farm at Dubbo locked in good grain prices at harvest, Chesworth admitted feed costs are getting “out of control”.

There will be crops grown south of West Wyalong this season but farms without irrigation and not getting rain are under incredible stress, Chesworth said. “A month ago we were still hopeful of getting late winter rain in this region; not so much now.”

“They’ve just put out a freight subsidy on fodder and we’re grateful to everyone who advocated for that, but the cap of $20,000 is a laughable amount; that’s what we were getting 20 years ago. I’m not saying it’s not helpful but dairies are much larger than they were 20 years ago and there’s a greater dependence on purchased feed.”

But Chesworth says most farmers are doing it tough. “It snuck up on us. Our farm is in a one-in-20-year dry. It’s worse than 2006 and that’s quite surprising.”

Finley farmer Neville Kydd said farmers in the area had been going okay “but it’s starting to get to the pointy end”.

“It’s getting to the irrigation season and there’s no irrigation water available and if you go to the trading market they’re indicating 350/megalitre and rising. Realistically there’s no money in it for dairy farmers at the moment.”

The Kydds have good supplies of silage but Kydd added “that’s not endless”.

“Last time the drought was for three years. We’re at stage one, with silage on hand, but if it’s another three years the reserves will be gone.”

In the 2006 drought the Kydds used palm kernel expeller but that is no longer imported. “It’s not everything and nutritionists don’t like it, but it sustains animals and extends what you’ve got quite well. It saved our arse last time; we used about 4500 tonnes of it.”

Kydd predicts farmers will be forced to leave the industry.

“Come middle or late spring, if it doesn’t improve dramatically a lot of people are just going to pull the plug and shut down.”

Farmers in Hawkes Bay are facing a desperate situation with no relief in sight from the disastrous drought gripping the region.

It’s been a tough summer for most dairy farms including Owl Farm, the St Peter’s School demonstration farm near Cambridge.