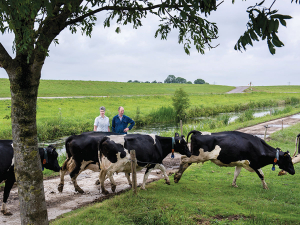 European farmers are being paid for keeping their cows outdoors.

Dutch co-op FreislandCampina says 248 farmer shareholders opted for outdoor grazing, so increasing the percentage of farms doing this from 81.2% in 2018 to 83% in 2019.

“The final percentage will be determined in December at the end of the outdoor grazing season,” the co-op says.

“This makes the dairy sector visible to the people,  and the characteristics of the Dutch landscape -- cows in green meadows -- are preserved.”

The cow in the meadow is part of the Dutch landscape.  FrieslandCampina encourages farmer shareholders in the Netherlands, Belgium and Germany to put their cows and young cattle outside.

The co-op says not all dairy farmers can graze their cows outside. Some lack enough land for grazing, and land may be too far from the farm.

FrieslandCampina offers financial incentives to encourage farmers to graze cows outdoors and it acknowledges outdoor grazing requires cows get a lot of attention.

To qualify, at least 25% of the cows and young cattle present at the dairy farm must graze outside for 120 days a year for a minimum of six hours per day.

While a cow in the meadow is always a beautiful sight, FrieslandCampina says a cow in the shed also has a good life.

“Our member dairy farmers make sure that the shed offers everything the cows need -- room to move, space, light and air, soft bedding, clean drinking water and feed.

“Everything must be focused on proper housing and the cow feeling comfortable.”

FrieslandCampina helped farmer shareholders to keep their cows alive six months longer in 2020 than in 2011. In 2011, the average cow lifespan in the Netherlands was five years, eight months and 11 days. At end of 2018 that had dropped on average to five years, six months and 14 days.

“We are working together with other parties in the sector to increase the longevity of the cows,” the co-op says.

One of the world's largest dairy co-operatives celebrated its 150th birthday this month.