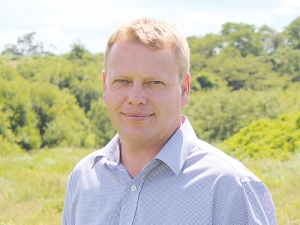 “It doesn’t matter whether the new platform is needed 8km from our Hamilton base or, as in the case of Terranova, 16,500km, the same fundamentals apply: farmers want a product tailored to their needs and which will perform and [endure].

“Those were the attributes Terranova wanted. Their farms are relatively isolated from our service centres so they wanted state-of-the-art systems which are easy to use, robust and [low] service.

“With servicing in mind, Terranova opted for a 60 bail Centrus platform which is 80% lighter and five times stronger than concrete alternatives.

“The deck sections are formed in a multi-layer laminated process that includes Kevlar, a material five times the strength of concrete and used in the manufacture of the latest Boeing Dreamliner aircraft, Americas Cup racing yachts, police vests, etc.

“The strength and lightness of the rotary platform means less wear and tear on running gear, and lower maintenance costs. A 60 bail Centrus rotary platform, for example, is 5 tonnes compared to the 26 tonnes of a concrete platform.

“The composite platform is unique to Waikato Milking Systems, which has a world-wide patent, and is made entirely at our Hamilton base and shipped to the destination.

“We prepare a layout of the parlour which takes into account such things as cow flow, integration with barns where the herd is housed, and multiple herds where several thousand cows are milked up to 22 hours per day.

“The platform was constructed entirely in New Zealand and shipped to Russia in two containers.  Once the milking systems arrived we sent an engineer over to build the rotary platform supported by two or three of our local service people.

“Our engineer normally spends 18-21 days on site and then comes home. He is followed by another man who oversees installation of the milking machine which can take up to 20 days.

“[Then another man] commissions the platform and spends four to five days onfarm, training the staff in how to operate the milking system and how to milk cows in a rotary.”