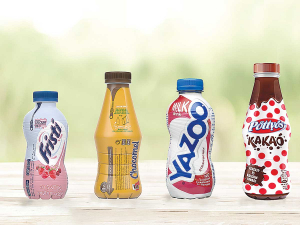 One of the world's largest dairy co-operatives celebrated its 150th birthday this month.

FrieslandCampina is owned by 17,000 dairy farmers from the Netherlands, Belgium and Germany.

Its history dates back to 1871, when a group of farmers established the founding company in the Netherlands.

The following year, 20 farmers in the Dutch village of Wieringerwaard, in North Holland, decided to collaborate. Together, they bought a building, two cheese tubs and a weighing scale. Soon after they appointed a cheesemaker, and this marked the first official cooperation of farmers.

In Friesland, a northern province, something similar happened in the village of Warga; a group of farmers united in a cooperative. After many mergers, these cooperatives finally resulted in the creation of FrieslandCampina. Today, dairy is one of the Netherlands' most important sectors.

FrieslandCampina chairman Erwin Wunnekink their ancestors already knew that together they are strong.

"That was true in those days, and it still is. It is the core of our identity.

"We conquered new markets by working together. We initially did this close to home in the cities, then just across the borders and, eventually, all over the world.

"Almost all the people in the world know our cheese and our infant nutrition."

Chief executive Hein Shumacher says the business is based on 150 years of cooperative knowledge and experience.

"Its foundations consist of family businesses that have been members of the current cooperative and its legal predecessors for many generations.

"We have enterprising farmers, who by working together daily provide millions of consumers throughout the world with the goodness of milk, from grass to glass, every day. I am really proud of this," he said.

One of the world’s largest dairy cooperatives is moving to 100% recycled polyethylene terephthalate (PET) bottles from next month.

Fonterra is pulling out of a European joint venture as part of its portfolio review following last year’s disastrous financial results.