Feed pads worth their weight in concrete 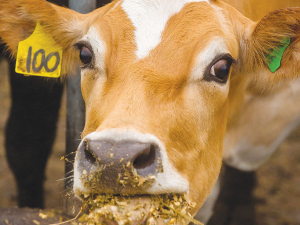 Pioneer forage specialist Ian Williams on the many benefits of feed pads.

Pioneer at Fieldays promoted the use of an app we had developed looking at the profitability of building feed pads.

The app was developed in response to requests from farmers wanting to build feed pads but not knowing whether it was worth doing or not.

Three things have fuelled the growing interest in feed pads:

Secondly, with rising concern about Mycoplasma bovis, farmers have become focused on biosecurity.  This is prompting them to explore ways to either keep cows at home or on the runoff rather than sending them off farm to be grazed by someone else.

Thirdly, increasing pressure from central and local government is causing some farmers to change how they deal with effluent and nitrogen loss.

While the need to maintain or increase profit by optimising pasture harvest is behind the first reason for building a feed pad, the second and third reasons are concerned with meeting compliance expectations and de-risking the farm system.

Whether it is profitable or not to build a feed pad depends on the farm and its system.  As a general rule, higher stocked farms feeding more supplementary feed on soils likely to pug when wet usually achieve the highest returns from a pad.  It’s obvious why.

More cows per hectare mean more hooves per hectare and so greater risk of pasture being damaged by treading/pugging if the soil gets wet.

The same argument is made for wetter farms: these are more likely than drier farms to see pasture damage through pugging.  Likewise, the more feed being fed the greater the chance of feed wastage.  All three factors have a big effect on the profitability of the system.

Reduce pasture damage. Take a 100ha, 300 cow farm growing 14tDM/ha/yr.  Also assume 30% is at risk of being seriously pugged in spring.  Research has shown pugging can cause up to a 40% loss in pasture production the following season.

If we assume the 300 cow farm is feeding 1tDM/cow in supplementary feed fed out on the paddock, losses could be as high as 40% or 120tDM.  Losses also occur on a feed pad: let’s assume about 15% or about 45tDM.  At a feed price of 30c/kgDM, the saving of having a feed pad amounts to about $22,500/yr.  From the example above, the interest cost of a feed pad is $18,000, so if the aim was solely to reduce feed wastage then putting in a feed pad and allowing for some extra costs is a break-even scenario at worst. Add in reduced risks from above, then it is a no-brainer.

One final comment: we often hear a farmer say, e.g. “A feedpad enables me to sleep easy on a shitty rainy night knowing the cows aren’t ruining the pasture”, or “Having a feed pad and a gate timer means I never have to get cows out of the paddock and wander behind them as they make their way to the shed at 5am on a freezing July morning”.

Contact one of the Pioneer area managers at www.pioneer.co.nz

Dairy farmers are encouraged to attend the upcoming joint New Zealand and Ireland Pasture Summit forum, which will address whether pasture is still the way forward.

Northland farmer Murray Jagger says it's time to focus on alternative pastures that can deliver better milk and beef yield.