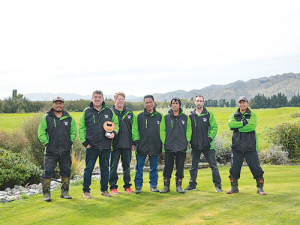 Entering the Ballance Farm Environment Awards was always the plan for Eric Jacomb, a founding partner of Medbury Farm Ltd, winner of the Canterbury Supreme Award.

Jacomb did not live to see the vision fulfilled, dying in a tramping accident in South Westland in January 2016.

General manager Dave Hislop said it was Jacomb who wanted as a key indicator in the farm’s business plan that it should be a farm happy to enter the Ballance environmental awards.

“We are following his dream,” said Hislop at the farm’s recent winner’s field day.

Nestled between the Hurunui and Waitohi Rivers near Hawarden in North Canterbury, Medbury has been progressively developed from an original 209ha dairy support block bought in 2001.

It is irrigated from two bores and consents from both rivers. A complex shape unsuitable for solely pivot irrigation, it has been converted from border-dyke irrigation to a mixture of pivots, poles and long laterals, with the long laterals being progressively replaced by poles as finance allows.

The judges commented that part of the farm’s strength was the governance and estate planning put in place before Jacomb’s death. Medbury Farm Ltd had a well thought-out and comprehensive share milk agreement and exit plan.

“There has been an excellent attention to detail in business planning, governance and policies and how this influences and drives the business.

“There is outstanding documentation which includes a health and safety programme, farm environment plan and a five-year environmental action plan. The farm partners understand how management decisions and practices will have environmental influences.”

The whole farm was soil-tested and fertilised.

“The planned protection of soil structure and the use of nutrient budgeting in Overseer leads into a good understanding of risks and mitigation to prevent losses. Medbury Farm Ltd has fenced and planted its boundaries to the Waitohi and Hurunui Rivers. It has also planted natives around both the farm dairies.”