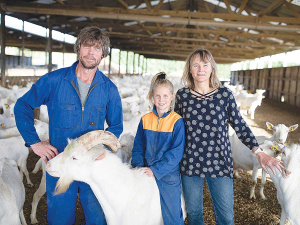 The system, including automatic cup removers, milk meters and DairyPlan software, have contributed to worthwhile efficiency gains, say the Smitstras.

They have ‘gained’ two extra hours per day and the ability to identify their top performing goats for breeding.

The Smitstras goat farm is a family business. Wiebe and Piety have been in the industry for 25 years, raising five children in that time. They now milk 1200 goats on a 130ha farm in Matamata.

The herd is made up of Saanen goats, which originate from Switzerland. Replacements are reared on farm (about 30% annually).

The goats are milked twice daily, either by Wiebe or one of the family.

In the past they worked in an old 40-bale herringbone parlour with highline swing-over clusters and pulsation. Milking took four hours morning and evening.

“I told these guys what I wanted, and they came up with plenty of good ideas, turning our old milking shed into something modern and efficient,” said Wiebe.

“I chose to work with GEA because they have a lot of research behind their equipment and they’ve got plenty of experience in the goat milking industry worldwide.”

GEA goat milking equipment prioritises the comfort of the animal, while the range provides flexibility for farmers on a budget, with options to upgrade at any time. Most of the equipment can be retrofitted to existing parlours.

Wiebe’s upgrade doubled the capacity of his parlour to 80 bails.

New features include fitting a low line with cup removers, Metatron milk meters together with DemaTron 70 control units (featuring time or flow take-off) and PPiD (per point identification) with RFID.

DairyPlan is linked up to record the milking time, volume and conductivity for each animal, with additional information on animal health, mating and kidding.

For Wiebe, the changes have been very cost-effective.

They’ve shaved off one hour in the morning and 1hr 20min in the evening. And that’s with teat spraying.

“A double up parlour makes cupping much quicker and the cup removers ensure there’s no overmilking,” said Wiebe.

Capturing data is another big plus for him.

“I can also see exactly how each goat is producing as they milk, with the information appearing on the Dematron units above each animal.

“This information is fed into DairyPlan so we can see which animals consistently perform well. We can also identify animal health and possible mastitis issues before you might notice them with your own eyes.

“It’s also saving us money. For example, we used to herd test four times a year, but don’t need to anymore. We have all those details in DairyPlan.” That’s a saving of $14,000 a year.

Wiebe notes their production levels remain similar per goat, but the upgrade enables them to milk more goats.

“At the start of the season, we had some animal health issues. But since we started in the new plant, those problems disappeared.”

Cup slip is a thing of the past and there are fewer grading issues.

What does the future hold for the Smitstra goat operation?

“We have generally been careful about investing too much,” said Wiebe.

“But we feel that the goat industry keeps getting better with the market much more positive than it was 20 years ago. The Dairy Goat Co-op continues to want more milk and we’re always aiming to better our operation.

“We are prepared now with a high-end milking parlour and good information on the herd. We are already building another barn and will increase our herd size.”

Shelter is one of the first considerations when contemplating the purchase of a doe, according to the New Zealand Dairy Goat Breeders Association.

The Australian dairy goat industry is relatively small, but there is an increasing consumer demand for healthy and exotic dairy products.

Worms are probably the biggest health problem for goat farmers.