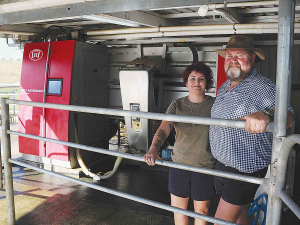 Ian and Carmen Comins milk 85 cows on a 29ha farm in Kihikihi, Waikato.

They converted a 29ha maize growing block, back into dairying nine years ago, milking 100 cows in an old 10-a-side herringbone shed.

Robotic milking was always on the mind of Ian Comins, who is also a contractor and spends a lot of time off the farm.

“We had been thinking about going the robotic way for a number of years, but milking 100 cows, we were always told that we needed to have two robots, as ideally, one robot could milk up to 70 cows,” he told Dairy News.

“With the cost of having to buy two robots, we couldn’t justify it.”

However, during a visit to the National Fieldays in 2017, they were told by another robotic milking machine supplier that if they dropped their cows numbers to 80, one robot could do the job.

“And that one robot would be able to cope with that amount easily and do the same production as 100 cows,” says Ian.

“That was all we needed to hear, so the ball started to roll.”

After shopping around, the Comins settled for Lely Astronaut A4 because “it came down to the best price”.

In April 2018, after the cows were dried off, the herringbone shed was demolished. Within three months, the Lely Astronaut A4 was installed.

Carmen says the robot has had a positive impact on their lives.

“There is less manual labour on farm and has freed up a lot of time, so Ian can spend more of that on his contracting business.

“And we are not the only ones who are happy with this way of farming: the cows are happier, friendlier and relaxed doing their own thing at their own pace, so we have more production.

Carmen says the cows have a transponder on a collar around their neck, which tells the gate system and robot when they are ready to be milked.

“The cows will leisurely walk down to the shed at their own pace, when they are ready to be milked and move to a new paddock.”

It takes the Comins about one hour in the morning to clear the previous night’s paddock of cows, put another fence up, hose down shed and yard, change milk filter, check computer for any cows that might be sick or late, clean robot and feed out.

In the afternoon, it takes Carmen about the same to clear the day’s paddock of cows, put up fences, hose down, change the milk filter and check the computer.

With the herringbone system, Carmen was spending up to six hours per day on the farm, four of those hours milking.

With the automatic milking system, dairy tasks now take around two hours to complete each day, giving Ian and Carmen more time for themselves.

The Cormins are glad they opted for robotic milking.

The robot also controls supplement feed: cows are fed between three to five kg of meal during milking, depending on their daily production and grass and silage made on farm.

Every eight hours they are automatically sent to a new paddock, with three raceways - A, B and C.

“So any time you know which race the cows are on,” says Carmen Comins.

Carmen says the Lely Astronaut A4 has served them well.

They calve twice a year so the robot is in use all year round.