'No downsides to OAD milking' 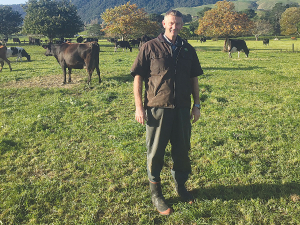 Matamata farmer Cam Houghton is an enthusiastic once a day milking advocate and is always looking to add to his farming knowledge, partly through attending SMASH events.

He has been farming at the base of the Kaimais for his whole career, and is currently the owner of the 150ha family farm, where he milks 400 kiwicross cows, producing 375 kgMS/cow.

"An Auckland doctor bought the farm across the road in 1982. We rang him and said do you want a sharemilker? He said 'Yeah, I do', so I went across there and sharemilked. I had just turned 19, I owned ten cows and a Honda 500. I had to buy a herd in the middle of July, so I bought some of Dad's old cows, and then went to the Morrinsville sale, bought whatever we could find, and milked 125 cows.

"I did that for a couple of years till that farm sold. I got in young, but I had Dad as a consultant and helper. He reared all my calves for me. I used to bring them in, he would feed them all in his shed, and once they were taught, they would come back down to my place.

There are a number of factors driving Houghton's enthusiasm for OAD.

"In my experience there are no downsides to it. I've been doing it full season for five years. Prior to that I had all the young stock on OAD for about 13 years. With OAD I think I can get another 10 years out of myself. I enjoy milking, it doesn't worry me, it is just the afternoons I don't like. Once you start OAD it is like this big pressure has come off you; you are finished in the morning and that's it. If you haven't got a feedpad, why are you milking twice a day? I used to have two labour units and now I only have one. I dropped a unit and rented the house out. Financially it is so much better."

Houghton gains a lot out of attendign SMASH events.

"The SMASH events are bigger, well run, and a lot more in-depth on a subject. When you go to a discussion group, it is more for local farmers to talk about whatever issues they are having, then you have a quick look at the cows, a chat and a sausage, and head off. The SMASH ones, you are really trying to learn something about whatever the host farmers are doing."

He attended a recent event which focused on masitis, and how the hosts consistently maintain their herd's grade-free status.

"I got some really positive stuff out of that one about why they have a lower cell count than myself. One of the keys to their success was that they dry-cowed and teat sealed every cow on the farm.

"I think some people are shy to walk into an event on their own. The way I think about it is, if you go to an event and learn one thing, quite often that thing will make you a better farmer.

"There are a lot of practical ideas you can pick up, like at that low cell count event, teat spraying the colostrum cows before they strip them, and teat spraying their hands regularly - that sort of idea is just something you pick up and then you save yourself a couple of cases of mastitis. You can always learn something."

Don’t adapt to once-a-day on a whim

Once-a-day (OAD) milking farm consultant Leo Hendrikse says planning is a key element in succeeding with a conversion to OAD.

The expertise of long-time OAD farmers is a standout at their discussion groups.

The future of once-a-day milking was talked up recently at a DairyNZ discussion group near Otaki.

Good results have been seen in boosting profitability from pasture management on two Northland 'partner farms'.