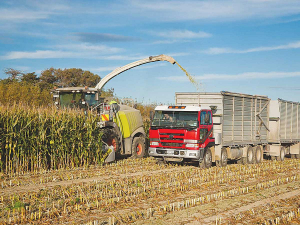 Maize silage ‘is still one of the best farm systems supplements available to Kiwi farmers’.

Apart from Covid-19, there seems to be one topic that is dominating the farming media at the moment – freshwater and all the new rules and policies designed to protect it.

While some regional councils have been focused on fresh water for a while now, the National Policy Statement for Freshwater Management (NPS-FM) and the National Environment Standards for Freshwater (NES-FW) represent a broadening of the rules across the whole of New Zealand.

All regional councils will now have to make plan changes to give effect to these new regulations.

The new rules introduce restrictions on intensification activities with resource consents required to convert more than 10ha of land to dairy farming, or from forestry to pastoral farming.

A consent is also required to expand irrigation area on dairy farms by more than 10ha, or to expand the area of grazed forage crops, or dairy support activities above historical levels.

Intensive winter grazing of forage crops will require a consent where the activity occurs over 50ha or 10% of the property, whichever is the greater, and where it occurs on slopes 10 degrees or steeper.

One of the most talked about rules is the cap on synthetic nitrogen fertiliser application to no more than 190kg/ha to pastoral land including areas grown for forage crops.  As other commentators have said, this is the first time that an input control has been placed on New Zealand farmers.

From my understanding, the reason for this is that maize silage is harvested, stored off paddock and then usually fed on a feed pad. Unlike pasture and forage crops, it is not grazed in the paddock with the associated return of urinary nitrogen to the land.

As I have written many times before, maize is a deep-rooting grass with well-documented high nitrogen use efficiency. Maize roots go down to up more than 1.8m in unimpeded soils and therefore to the plant can draw nutrients (including nitrogen) which have dropped below the rooting depth of pasture and many small-seeded forage crop species. Because it produces high yields, a maize silage crop takes up a lot of nitrogen. In fact, a 20tDM/ha crop will remove about 250kgN/ha or half a tonne of urea. Recent published research conducted by Pioneer® brand seeds shows the annual nitrogen leaching loss under maize silage followed by a harvested annual ryegrass catch-crop can be as low as 6kg N/ha*.

The good news doesn’t stop there. Maize silage itself is a low nitrogen feed, which is great for diluting the high dietary nitrogen levels found in ryegrass-clover pasture for much of the year.

Maize silage is still one of the best farm systems supplements available to Kiwi farmers. It is low-cost, great for increasing cow condition, extending lactation and filling feed deficits.

The future looks exciting. I genuinely believe that because maize has a lot of proven environmental benefits and because we are seeing continued advances in crop establishment and management practices, maize cropping will become even greener in the years ahead.

• Ian Williams is a Pioneer forage specialist Email This email address is being protected from spambots. You need JavaScript enabled to view it.

Stick to the science

The other day I read a couple of articles that made me think. The first, published in Stuff was on a report by Otago and Victoria Universities on the number of Kiwis at risk of getting bowel cancer because they live in areas with an elevated water nitrate level.

Failing to plan is planning to fail

It seems basic human nature that when things are tough, we become very focused on surviving. We concentrate on doing the essential things that will enable us to get through the pressure or difficulty we are facing.

Getting ready for planting

It's that time of year again — planning for maize.