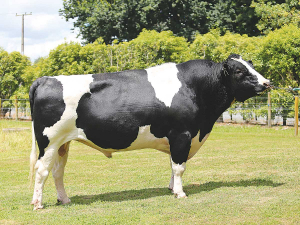 LIC bull Maire Mint Fire-Up is the third winner to come from Maire Farms near Sanson to win the highly-regarded title after Maire IG Gauntlet-ET and Maire FI Golddigger won the trophy in 2017 and 2018 respectively.

The Mahoe Trophy is awarded annually by Holstein Friesian New Zealand to the breeder of the locally-bred Holstein Friesian bull with the highest aggregate points for breeding worth (BW), protein BV, fat BV, and longevity and type traits.

Maire Farms runs 700 Holstein Friesian cows and was bought by the Rowe family in the late 1960’s. It has been selling contract bull calves to LIC for 15 years.

Fire Up’s breeder Craig Rowe says the award is a huge honour for the stud.

“It’s something we’ve aspired to for a while as breeders. It shows that our bulls are really good all-rounders and have lots of traits that other farmers like. To win it (the trophy) the first time was really exciting, but to have three winners is something which makes us very proud.”

Rowe credits listening to what farmers really want from their genetics.

“I’d like to think it’s because we’ve stuck to breeding balanced bulls that we think are going to be successful and that most people in the industry would like to use,” Rowe says.

“There is no perfect bull, but if you get as many things as you can right in one bull, it makes them more likely to be competitive. I don’t know how long it will be before we win again, but we’ll definitely keep trying!”

LIC says its sires have dominated the Holstein Friesian awards in recent years with the last seven winners being bulls that belong to the dairy co-operative.

LIC’s livestock selection manager Simon Worth says the success is due to a balanced approach that LIC, like the Maire stud, takes with its genetics programme.

“While this year’s winner Fire-Up is a high-production bull, it is his combination of production and TOP (traits other than production) in particular that makes him a real hit with farmers, and this is a pattern we’re seeing when looking at what farmers actually want with their genetics,” says Worth.

“Farmers don’t just want a cow that produces a lot of milk, they want one that is good to deal with on farm and has good physical traits. We’re responding with the genetics we provide farmers.”

Fire-Up has featured in the competition’s top three placings each year since 2017. He currently has a BW of 158.

Five of the six winning teams in the competition were sired by three different LIC bulls, all related to each other.

Herd improvement and agri-tech cooperative LIC has formed a distribution partnership with Israeli-based Afimilk to market its hi-tech cow collars in New Zealand.