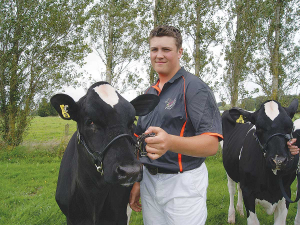 A Taranaki teenager has been recognised for his cattle handling skills, ability with a pair of clippers and all-round talent, at a competitive dairy cattle event in Southland.

Neko McDonald, 16, was awarded the Paramount Cup at the National All Dairy Breeds Youth Camp in Wyndham, Southland this month. The award recognises the top performing Holstein Friesian New Zealand youth member at the camp.

The four-day event attracted 18 participants from across New Zealand who were all given their own heifer calves to look after for the camp which they had to feed, groom, teach to lead on a halter and get show ring ready.

Neko, a year 11 student at Francis Douglas Memorial College in Taranaki, says the highlight of the event was being able to meet like-minded young people and seeing what can be achieved with stock in a short period of time.

“It was quite amazing. You get the heifers on the first day and they are towing you around and can’t lead and then to see where you get them at the end of the camp is quite amazing.”

Neko lives on a dry stock property but says he developed a passion for breeding and showing dairy cows. He says he learned a lot over the four-day camp.

“I’m not the biggest fan of clipping but I’m slowly getting better. I also liked learning more about leading and being shown how to lead properly. It really made sense once you saw it.”

Neko says in the future he would like to have his own stud and eventually his own business as a stock agent.

At times the camp, held at 4 The Girls Dairies, owned by Niels Modde and Jodie-Lee Templeman, resembled a hair dressing salon as camp members shampooed their heifers and used electric clippers to prepare and trim their coat.

Clipping a heifer’s coat and holding her head correctly in the show ring can help enhance the animal’s appearance and minimise its flaws.

Participants were also schooled in using social media to promote their own animals and their studs and spent time completing team building exercises and learning about animal health.

Other awards given at the camp included the Dennis Terry Memorial Trophy which went to Dylan Beardmore and the Best Presented Heifer trophy went to Brad Seager.

Brad was also the winner of the 2020 Holstein Friesian Black and White Youth Photo competition with his heifer Westell Alcove Lacey.

It was Dylan's second time at the camp, and he won the trophy for most improved clipping.

The 17-year-old is currently working on his parent's Taranaki dairy farm where they milk 600 Holstein Friseians and a second herd of 300 cross bred cows. He is also studying at the Primary ITO.

"It was nice to win the award for the clipping. There is an art to it, and it takes time and practice to perfect it. I'm not perfect yet, but I try."

Dylan said he enjoyed preparing his heifer and having a good animal to show off. Heifers used at the camp were provided by Owen and Cathy Copinga from Rivendell Stud and 4 The Girls Dairies.

"We got a good idea of the type of animals at Rivendell. I would definitely recommend the camp to other young people to improve their skills and meet other people in the showing circle."

It was Kimberley's third camp. The 16-year-old Menzies College student, from Dacre, lives on her parent's dairy farm where they milk 170 cows.

"I love it because you get to be around people that think similarly as you. It's good to keep contact with everyone else from around the country. I think that's important for being able to keep showing alive," says Kimberley.

She says learning better clipping techniques was a key part of the camp for her.

"I was never very good at clipping, but I have learned a lot over the three camps. It was nice learning more about top lines this time around and how to blend better."