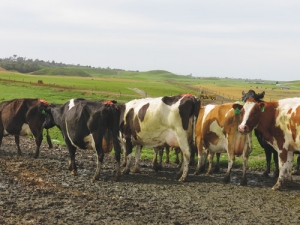 Getting cows in-calf quickly is the key to achieving a good calving pattern, says DairyNZ.

Getting cows in-calf quickly is the key to achieving a good calving pattern, says DairyNZ.

Heat detection, pre-mating heats and bull management are key ingredients for a successful mating. Getting these right will benefit the farm's submission rate and six-week in-calf rate.

The easiest way to spot cycling cows is to do pre-mating heat detection.

Use tail paint to pick out cycling cows. Use one colour tail paint to start, then a second colour as cows cycle and lose their tail paint. Within two weeks about half the cycling cows will have been identified. At three weeks, cows with the original colour are the non-cyclers.

Calculate the herd's pre-mating cycling rate using the InCalf book for the percentage of cows showing signs of heat before mating begins. If cycling is less than 75% by 10 days before the planned start of mating, heat detection has not been fully effective and/or there are too many non-cyclers.

At that stage it is time to seek advice and consider which options are available to improve heat detection during AB (artificial breeding) and treat non-cycling cows.

The best heat detection starts with careful planning, good observation and the effective use of detection aids.

Being able to interpret cow behaviour and other signs is critical, along with good record keeping and training for those doing heat detection.

Start by reviewing the farm's heat detection skills: does everyone know what to look for in detecting cows on heat? Then, decide which combination of aids the farm will use (tail paint, heat mount detectors, activity meters and heat synchronisation).

Tail paint is an inexpensive and effective way to detect cows on heat.

Apply tail paint to all cows just before the start of mating. Touch it up at least weekly and check for cows with rubbed or broken tail paint during milking.

Re-checking tail paint for rub marks immediately before each cow's insemination will avoid inseminating cows not on heat.

To help identify cows not yet inseminated or those only showing weak signs of heat, reapply a different coloured tail paint to recently inseminated cows once other cows no longer try to mount them.

Heat mount detectors can be particularly effective on farms with lower skilled staff checking cows on heat, and when used with paddock checks for heat.

Applied to the cow's backbone, the detectors will become brightly coloured and easily recognised. Again, heat mount detectors should be applied just before mating starts, then monitored for activation and removed at insemination.

Until the end of the AB period, the detector should be replaced after insemination, when the cow is no longer being mounted. Regularly replace any heat mount detectors damaged or coming loose.

Have the bulls organised

Good bull management ensures they are well adjusted to their environment before mating. Move bulls to the farm two to three months before they are required for work. Buy bulls from the same mob and split them into two teams to rotate them (half resting, half working) to reduce fighting.