Getting better with training 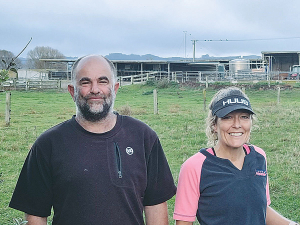 This calving season will be a little different for dairy farmer Jo Forsyth thanks to a recent MINDA LIVE training session that marked somewhat of a ‘turning point’ in her confidence and utilisation of the technology.

Forsyth says MINDA LIVE and the associated MINDA App will cut down double-handling and provide her with more-targeted management insights (data, information, reports) where and when it’s needed.

“This calving season I’ll look to run reports that split out the herd so that we have a better view of our early-calvers.

“We like to pull out the ones that tend to be early, but their udders might not drop until later.”

She’ll also use MINDA software to identify cows that have previously had calving difficulty, and any animals that required treatment after birth.

“That way we can keep an eye on them so they don’t go down again.”

Later in the season, when it came to culling or mating, Forsyth would produce reports that provided key insights about which cows, for example, were best to target for premium semen, or which cows were better to sell or cull.

She and husband Rhys often believed they had a good idea of who the top and bottom performers were, but MINDA LIVE’s data on-screen was now enabling them to review some of their assessments, re-thinking who the best and poorest breeders and future-producers would be.

“We try to have the best up-and-coming animals coming into the herd, and from there, we also choose our culls.

“Having all of the data in the MINDA system makes culling, and even decisions on surplus cows, so much easier because we can see the animals who are better off being sold rather than being sent to the works.”

Jo and Rhys are part of LIC’s Sire Proving Scheme, and this has given them further appreciation of the importance of accurate cow information.

“SPS is invaluable for pushing for the best herd you can possibly run; having to choose animals to cull is now really hard.

“Our data and strong parentage information helps... there’s nothing worse than culling a good animal, and down the line learning you’ve held on to one that isn’t performing.”

Today Forsyth is one of the approximate 90% of famers who are using MINDA LIVE, many of which have taken the opportunity to up skill during the past few years.

Getting to grips with a more-streamlined way of data input and onthe- spot access to key herd information is seen as a crucial part of farm management and herd improvement, and Jo knows she’s no exception.

That’s why she didn’t regret taking an hour out of her day in April for one-on-one training session with a specialised LIC trainer.

“Joss (the trainer) provided a number of easy tips that were new to me–she was amazing, so helpful and took me through things at my own pace.”

Originally set-down for a personalised faceto- face visit, which had to be cancelled, the training session was later conducted online with the use of Zoom; this made for a quick and efficient session in the comfort of Forsyth’s home.

Further training sessions are likely to be offered by LIC early in 2023. Farmers should get in contact with their agri manager for more information.

An extensive MINDA help page is also available on LIC’s website, including step-by-step instructions and simple-to-follow guides to help farmers get more out of MINDA.

LIC has bowed to shareholder pressure by dropping its plan to transfer its herd testing and Minda businesses to a subsidiary.

LIC has launched a new app, which will help farmers keep their cows’ health in-check from a mobile device.

LIC’S $11M spend on R&D is high by NZ primary industry standards, says chief executive Wayne McNee. The core business of sire proving and getting the best bulls, the development of new IT products and longer-term R&D took most of the money. Some research is government supported through Primary Growth Partnership and other funding.

Young stock are an important asset to a farm, providing it with a future of high quality herd replacements – but only after careful management and rearing to ensure they achieve set targets throughout their development.