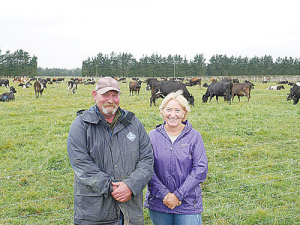 Parkhill was one of the first three dairy farms converted by Barry and her late husband Peter Barry in 1994. She is proud of the work done and is still being done on Parkhill.

“When you go to the top of the hill and look over the land, it’s amazing how it has changed in 23 years,” she says.

“It’s a beautiful property that deserves to be showcased. I’m ready to show it off. We haven’t entered environmental awards in the past because of people’s perceptions of dairy. Here’s our chance to change that.”

The Barrys bought Parkill in 2000 through an equity company called Longrow Pastoral Ltd. They changed the name to Longrow Dairies Ltd then bought Barry Farms in 1996 and Ashton in 1998 (as part of Epic Agriculture).

The three different entities were combined into one operating unit in 2000: BEL Group is made up of Barry Farms, Epic and Longrow. It employs 65 staff working on 2600ha of milking platform and leased dairy support land.

“It’s a credit to Andrea and Peter for their vision at the start and we are carrying on that passion,” Craig Pennell says.

He has managed Parkhill for three years with the help of a herd manager and two assistants with casual extras at busy times.

A former Fonterra networker, Pennell  has previously been sharemilking in Southland and Bay of Plenty and contract milking in Waikato, but this is his first position with a corporate enterprise. “There are lots of opportunities here to make a difference. I love sharing my knowledge and experience with others still coming through.”

A history of being grade free shows the team’s attention to detail on milking procedure and hygiene, as well as herd health, the awards judges said.

Record keeping is done on the computer daily, including rainfall, soil temperature, effluent application rates, samples taken for nitrates and any maintenance done. They also use the Fonterra diary for animal treatments, plant cleaning and checks, water usage and milk quality compliance such as vat temperatures.

Parkhill runs a pasture-based grazing system with about 500kg tonne of dry matter bought as pasture and maize silage.  About 20ha of turnips is used for feeding in January/February.

Effluent is spread by a travelling irrigator on a quarter of the farm. An annual nutrient budget with nitrogen fertiliser is used to support pasture production. The judges said BEL Group was aware of the requirement to meet nitrogen leaching limits under the Tukituki Catchment Plan Change by May 2020.

“As part of their sustainable milk plan, BEL Group is using Overseer to test scenarios and determine the best way to remain compliant. They are working with the council proactively on this.”

Native, blue gum and pine trees were planted in critical source areas when the farm was first converted. The farm has extensive shelter belts and some fenced wetlands. Stock is excluded from relevant waterways and a Fonterra riparian management plan has been completed. Temporary fences are used to keep stock out of some waterways. Cropping is avoided on rolling land and minimal tillage is used where possible.

Not hard being green – farmers

Fish, eels and a 1.5km farm walk were the highlights of a field day held on a King Country sheep and beef farm this month.