Farmers give the thumbs up to bobby calf rules 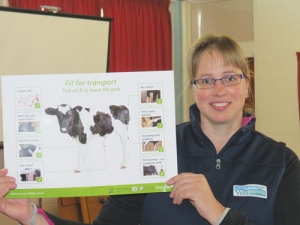 In Levin last week about 16 farmers attended a day-long seminar run by local vet Janine Barber, herself a dairy farmer in partnership with her husband.

The seminar covered all aspects of caring for bobby calves and even tested the knowledge of farmers, asking such questions as, how many bobby calves are produced (about 2 million), what are some products made from bobby calves (a few said lipstick) and what percentage are made into petfood (2.5%)?

Most farmers attending said they had a good handle on the new regulations.

Doug Easton says he will also have to look at this matter; Megan Kernohan, a calf rearer, says the laws are straightforward.

Much of the discussion was about handling bobby calves before and when they leave the farm: the need to feed the calves as near as possible to their departure time, and making sure animals are fit to be transported.

Barber says many of the farmers were unaware of the time lapse between calves leaving a farm and being slaughtered, hence the need to feed them as close to pick-up time as possible.

The new regulations will also incentivise farmers to improve
their onfarm processes, she says.

"I can give you a personal example: my husband used to do all the calf rearing on our dairy farm and I took that over about five or six years ago.

"I had this massive argument with him because I wanted to set it up so that I could feed the calves really fast. I told him, 'I can do this in 90 minutes but I need this amount of money to invest in the system to make more money'.

"At the end of the first year I made him $35,000 and only spent 90 minutes a day feeding calves and lost three calves out of 150. The year before they spent 2.5 hours on feeding the calves, lost 40 and didn't make any money.

"How you run your processes and how you use them makes it better for you and the calves," she says.

Legislation to kick in next month

Dairy farmers in the lower North Island are using the lull between drying off and calving to learn more about the changes in new regulations that will kick in with the new season.

Dallen Olsen, Fonterra's manager for cooperative affairs in the region, says many dairy farmers have attended the seminars on the new health and safety regulations being run by Beef + Lamb NZ.

And they are swotting up on new nitrogen management issues and the new animal welfare rules on bobby calves.

Olsen says this is a good time of the year for farmers to examine the regulations and think about compliance.

He says the seminars run by DairyNZ and BLNZ are well attended.

"Fonterra is doing all it can for farmers. We have launched a support package, so over the next seven months timely deals will be introduced in our Farm Source stores. These deals will coincide with particular activities onfarm, such as calving, and help support our suppliers,"
he says.

Olsen says Fonterra staff are talking to farmers, telling them about the co-op governance and representation issues they will have to vote on soon. Farmers must get engaged in this process, he says.

And now is the time for farmers to prepare budgets based on good and not-so-good scenarios.

Olsen says cows in the lower North Island are in good condition and he hopes the weather won't cause problems in the lead-up to calving.