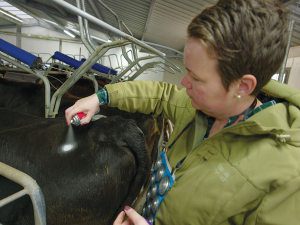 Heat detection technology has helped two Taranaki farmers to cut their herd’s empty rate from 16% to 11% in its first season, says the supplier, Gallagher Group.

The farm uses Gallagher’s FlashMate electronic heat detector pads to monitor cows’ behaviour when on heat – and to signal what’s going on by the pads’ flashing lights.

Corlett says the pads cost more than their usual scratch pads or tail paint, but it has paid for itself with better in-calf rates and a shorter calving season.

“It was worth it,” Corlett said. “We had a 5% decrease in our empty rate -- down to just below 11%. That means fewer cull cows, hopefully more replacement calves and a shorter calving period, as we have a lot of cows due within the first six weeks.”

Before using the pads their empty rate had climbed to a record 16%.

“We were all upset with that result,” Corlett said. “It was a tough season bad weather-wise and it seemed our cows weren’t coming onto heat or we were missing them.”

A neighbour had been using the pads so they decided to try them.

“Just the drop in the empty rate is enough to pay for it,” Corlett said.

“At 4am, even when you’re tired, it’s hard to miss a red flashing light. You don’t have to read a scratch pad. You still need a level of skill in reading a cow, but 90% of the job is done for you.”

The staff use a curry comb two days before applying the pads, removing excess hair from the cow’s rump, and so allowing the pads to stick close to the skin.

Darrell Jones has been appointed national sales manager of Gallagher Group's New Zealand animal management team. He has worked 14 years with the company.