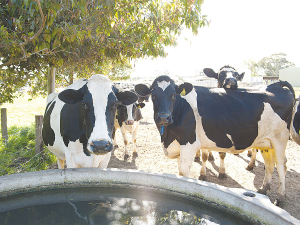 A North Canterbury company is claiming excellent results from devices which use electromagnetic radiation in the form of low-frequency radio transmitters to “structure” or “energise” water for a wide range of benefits.

HydroBoost claims the devices, when applied to stock, irrigation or domestic supplies, have been shown to reduce impurities, foster pasture growth and improve stock health, among other benefits.

The company says the technology removes iron and manganese from water in an environmentally friendly way and without the need for expensive chemicals.

“On a recent trial, it reduced iron 95%, manganese 92% as well as reducing arsenic, boron, lead and some other harmful chemicals.”

The company was founded by farmer Michael Richards who began looking into energised water many years ago as an alternative to chemical fertiliser. He has recently been joined by Michael Dennis as business development manager, to help expand beyond the 20 or so devices already installed in businesses as varied as dairy farms, a kiwifruit orchard, a North Canterbury polo ground and a Taranaki poultry farm.

Asked for the scientific basis for the devices, they cite the work of Gerald H Pollack, a professor of Bioengineering at the University of Washington in Seattle. Pollack maintains that a fourth phase of water exists, apart from the accepted solid, liquid and gas, and that it has important properties particularly in biological systems.

But his work remains controversial. “Most of the mainstream people have pretended that this doesn’t exist,” Pollack said in a recent YouTube interview.

Richards explains that the devices basically increase what he calls the “skin” of water - essentially the same property of water that creates a meniscus in a glass. He believes it’s a quality that rainwater naturally has in abundance but is lost from the ground or bore water used in irrigation.

“We haven’t got as far as peer review, and there’s a very good hard economic reason,” says Richards.

“The universities basically rip you off in the amount of money they need to do the work, and they also keep patents and IP of it.”

However they say the proof is in the results.

One satisfied customer is Waikuku farmer Barry Tull who says a HydroBoost device has dramatically improved his house water quality.

Tull, 90, who has lived in the district all his life and 30 years on his current block, told Dairy News that over the years his house supply first used a well that “went putrid” apparently from leaching from an old wool scour on the block, then rainwater (although it wasn’t always enough for his needs), and for the last eight or nine years a dip pipe from his main irrigation bore.

However, that water has such high iron content that he battled a serious rust and sediment problem, he says.

“If you haven’t run the bath for a fortnight or three weeks in a row, when you first turn the cold tap on the bottom of the bath would be like a cup of tea without milk in it for about four minutes before it cleared.”

Tull says the problem has cleared since a HydroBoost device was installed in his concrete storage tank.

“There’s no doubt about it, it certainly improved the water.”

Dennis says test results show that the observed iron content dropped 95% while the manganese reduced 92% over a four-month period.

“The result was unexpected for the customer but not for HydroBoost, where this type of outcome has been observed at a number of sites with water displaying high iron and manganese concentrations.”
Dennis says high iron or manganese in bore water can cause pivots to rust out, while high iron content spread on paddocks can create a copper deficiency.

And with the Three Waters reforms coming, some farmers face bills up to $20,000 to have clean water put onto their properties from the local council.

European pump proves its worth on Kiwi farms

Waikato-based AgFirst Engineering's boss Davieth Verheij was bowled over by WANGEN pumps on his visits to Europe several years ago.

There can't be many rural people who aren't familiar with the Howard Rota spreader, which revolutionised manure and slurry handling back in the late 1950s.

Making good use of slurry

The application of slurry or effluent has long been recognised as an effective method of returning nutrients to grazed or harvested paddocks.