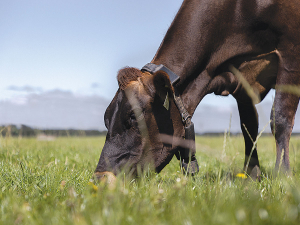 Halter claims its collars have been a massive stress reliever, especially during the Covid restrictions.

Solar-powered smart cow collar manufacturer Halter claims it will help combat the country's acute labour shortage when it expands into Taranaki, Southland, Otago and the Central Plateau next month.

The company says its growth is in response to significant demand from the industry, and comes off the back of its successful launch into Canterbury late last year.

Despite eased border restrictions and changes to the class exception scheme, demand for workers continues.

In January, the industry predicted it would be short of between 4,000 and 6,000 workers this year alone.

The company says smart solutions like its collar, which it says can save farmers up to 20-40 hours a week, will relieve some of the unrelenting pressure to recruit.

"It means owner-operators can effectively and sustainably run small farms single-handedly, and on bigger stations, it offers farmers the opportunity to operate at a higher level."

Halter business development manage Steve Crowhurst says the collars have been a massive stress reliever, especially during the red setting of the Covid-19 Protection Framework.

Jo Sheridan, the demonstration manager at Owl Farm - a 160ha dairy farm, a joint venture between St Peter's School Cambridge and Lincoln University, says the product has reduced hours, and allowed the entire team to see everything that's happening on the farm.

"By no longer needing two people milking and getting cows in we have more options to carry out other work on farm and offer flexible, sustainable time off."

On larger farms like Canterbury's Craigmore Group, one of the largest corporate farming operations in the country, it means they can offer farmers an improved work-life balance without compromising on production.

The current industy benchmark states one full-time worker is required for every 173 cows, but Craigmore is now able to manage 260 cows per full-time worker, all with sustainable hours. Matt Redmond, farm business manager on a 147ha, 520 cow Craigmore farm in the Culverden Basin, North Canterbury, says the company adopted Halter because they're passionate about sustainability and worker welfare.

"We've been able to offer staff a better working life. Rather than spending hours sitting behind cows, our workers can spend more time on high-value management and big picture tasks."

He says the cows are also calme without having the noise and pressure of a motorbike and dogs behind them.