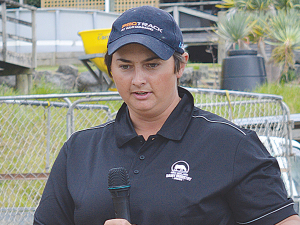 2019 Northland Dairy Manager of the Year Lorraine Ferreira has a unique job.

The farms’ primary objective is to support the Kauri manufacturing site through sustainable land application of the wastewater. The three farms produce about 100,000kgMS, peak milking 400 cows.

Ferreira says the key challenges for the farms are managing pasture and controlling weeds.

“The strong focus on irrigation and soil moisture levels limit the ability to harvest high quality pasture,” she says.

The farms use a lot of homegrown feed -- pasture, maize and turnips -- and import brewers’ grain and some PKE.

The feed strategy is to reduce PKE, using feeds that contribute less to fat evaluation index (FEI) levels and don’t cause problems during milk manufacturing processes.

Surplus pasture from irrigated areas is sold as balage/silage; harvesting the silage removes nutrients applied to the farm in the wastewater.

The farms are 343ha eff and include two herd shelters and a covered feed pad. Effluent is applied to 60ha not irrigated by wastewater from Kauri.

She says the ownership structure of the properties require her to be “comfortable operating in the spotlight and managing the farms to a high standard”.

Originally from Zimbabwe, she moved to NZ aged 15 and while at high school began relief milking jobs.

After spending most of her time in Canterbury, Ferreira, her wife Lisa and daughter Piper moved to Northland in June 2017.

“It resulted in high debt level for me and I’m still paying off the debt today,” she says.

While paying off debt Ferreira is saving money for a house.

Her short term goals also include completing an agribusiness diploma and qualifying as a firefighter; she is a volunteer with the Hikurangi Volunteer Fire Brigade.

Her long-term goals are to run a large agribusiness, own a beef farm and retire in comfort.

She was inspired to enter the awards by women winning the three regional awards in Canterbury.

“My focus is now on winning the national DIA competition; I will give it a bloody good nudge.”

What the judges said

The judges said she displayed leadership qualities on and off farm.

“Lorraine recognised that there was a shortage of volunteer firefighters in their area so joined the service. She runs discussion groups onfarm in an attempt to change the public’s perception of the dairy industry.

“She recognises the importance that a mentor had in her development and has taken the role of mentoring trainees in the industry.”